Despite that we, as Christians, can see through the charade because we have a whistleblower (the inerrant, inspired, and authoritative word of God) a third of human population has been thoroughly deceived by Islam. They have been taught falsehoods and the holiness of God, the nature of man, sin, Christ, and so forth. But, of course, they would say precisely the same thing about Christians. So what is the difference? Why should we believe in the Christian conception of God rather than the Islamic conception of God? I think there are at least 5 reasons Allah is not God.

Muslims do agree with both of these claims, that God is both just and merciful. The problem, though, is that in Islamic theology, these two traits contradict each other. 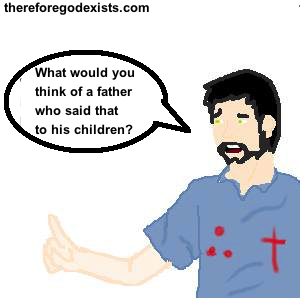 Suppose God has a guilty sinner before him, and pardons the mans’ crimes (has mercy). This God would be like the corrupt judge. But suppose God gave this person punishment (is just). This God would not be merciful. In saying that God is merciful to sinners, he is therefore unjust. In saying that he is just to sinners, he is therefore unmerciful. But he cannot be both, despite that the Qur’an teaches that he is both.

The Bible also teaches that God is both merciful and just. That is because at the cross of Jesus Christ, the mercy and justice of God kissed. When God brought down his wrath upon his Son, he was just, as Christ absorbed the punishment that we deserve for our sin. He was also merciful, because now guilty sinners can be absolved as we take on Christ. With that in mind, the Christian conception of God does not run into the conundrum that the Qur’an does. In Islamic theology, God is either unmerciful, or unjust. But he cannot be both just and merciful. Therefore, the God so revealed by the Qur’an is not the greatest conceivable being. Therefore, the God revealed by the Qur’an does not exist.

Jesus said, (Matthew 5:43-48), “You have heard it said, love your neighbor, and hate your enemy. But I tell you, love your enemy, and pray for those who persecute you.” Consistently throughout the Qur’an, it is affirmed that Allah does not meet this standard that Jesus outlined. He falls short in this manner and therefore also neglects to be the greatest conceivable being (because it is obviously better to loving than unloving). As Islamic scholar Darood Akbar, in his book The God of Justice writes, “Unqualified divine love for mankind is an idea completely alien to the Qur’an. Nowhere do we find the idea that God loves mankind. God’s love is conditional.”

Over and over, the Qur’an affirms that God does not love the sinner (Quran 2:99,277 277; 3:33,58; 4:37; 5:88; 6:142; 8:59). His love is partial, conditional, and must be bribed. Only when one expresses love for Allah, will Allah love you. Thus Allah never seems to ascend passed the mark of the tax collector and the Pagans who only greet their own people. Just imagine a father who forced his children to earn their love, rather than loving them by default. Some people have experienced parents such as that. I just cannot persuade myself that this is an adequate display of a being called Most High, for he is not most high. There are men who love their enemies, even when that enemy hates them. In this respect, they are higher than the God of the Qur’an.

3 – Allah is not the God of the Old Testament.

Allah said to be the Holy One of Israel. But there are a number of inconsistencies between Allah, and the Holy One of Israel. In the Old Testament, God is said to have a Son (Psalm 2:7). But the Qur’an unequivocally says that God has no sons (Qur’an 10:68). Further, and critically, in Judeo-Christian theology, the Son of God is also a divine figure; he is the human version of the invisible God – he is God himself. Thus, the God so revealed by the Old Testament is a trinity. The trinity is found throughout the entire warp and scope of the Old Testament Scriptures (the Jews did not know of it because they did not have as wide of a revelation as we do). Since the very beginning of creation, plural pronouns, and verbs are applied to God (Genesis 1:27, 3:22, 11:7, Isaiah 6:8). Even the word, Elohim (translated into Lord about 4000 times), is the plural form of the word “Lord,” indicating more than one person. So the God so revealed by the Old Testament is a trinity, and Allah is not a trinity. Therefore, Allah is not the God of the Old Testament.

Further, the Holy One of Israel revealed his name to Moses. His name is Yahweh, and that is what we shall call him for all generations (Exodus 3:14-15). But proper name of God in the Qur’an is not Yahweh, but Allah (According to Lane’s Arabic-English Lexicon, which is based on classical Arabic dictionaries, says under the word Allah, while citing many linguistical authorities, explains that Allah is a proper name, applied to God). Therefore, Allah is not the Holy One of Israel, as the Qur’an says. The Qur’an was mistaken, and could not have been written by God.

*4 – Allah is derived from Pagan mythology.

Allah was the chief of 360 deities worshipped in Paganism in Arabia before Islam was even manifested. He was worshipped also in the region which Muhammad’s parents’ resided. In fact, the literal name of Muhammad’s father, in Arabic, was Abd Allah. His uncle was named Obred Allah. The Pagan influence of Muhammad’s family is present not only in the name of the deity, but also many of the Islamic traditions are literally copy-cats of the Pagan traditions!

Muhammad’s family, and much of Pre-Islamic Arabia bowed in prayer toward Mecca, in worship of the moon God five times every day, using the name Allah. They would also observe a fast, marked by the crescent moon and lasting a month, literally indistinguishable from the tradition known as Ramadan. Even the Islamic symbol, atop all of the Mosques and on all of the flags, the crescent moon, is a direct derivative of the symbol that this branch of Paganism used. It is literally recycled from Pagan practice. It is therefore no mystery that the God worshipped by Muhammad’s followers is named Allah, nor is it any mystery that the traditions embraced by Muhammad’s followers are practiced. These are just cultural evolutions, but any deeper meaning would be awarded to the original adherents of the system, namely, the Pagans.

5 – Allah cannot be God, because Jesus is God.

In the last few decades, historians have attempted to develop a historically accurate portrait of Jesus of Nazareth. In doing so, many of the biblical claims about Jesus have been confirmed. Historians have reached a consensus about the following 5 biblical claims: the crucifixion (I argue for this here), the burial of Jesus in a tomb by Joseph of Arimathea, the biblical account of the empty tomb, various groups of people had experiences of Jesus where he appeared to them alive after his death, and the disciples came to believe strongly in the resurrection, and were willing to die for that belief.

Some of these facts, such as the crucifixion narrative, outrightly contradict the teachings of the Qur’an. But the best explanation of these facts is that God raised Jesus from the dead, confirming the Christian message. I made this case much more thoroughly in my article Did Jesus Rise From The Dead?

*Addendum: The author no longer believes point 4 (that Allah has been derived from Pagan mythology and has any causal link with the so-called moon god).