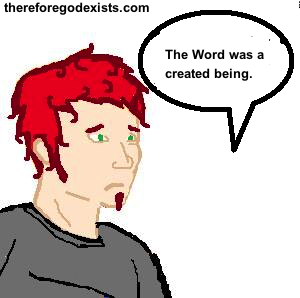 The gospel of John is perhaps the most important biography of Jesus, with regard to our understanding of who Jesus was. John wrote his prologue (1:1-18) knowing that it was the lens through which one reads the rest of his gospel. One must consider the teachings in the prologue when they read any other passage in the gospel of John. This article is going to zoom in on the first verse, which reads, “In the beginning was the Word, and the Word was with God, and the Word was God.” I am not sure there are many other sentences with as much latitude. There is so much behind it. There is so much that John wanted us to derive from this line. What is it? What does John 1:1 mean? 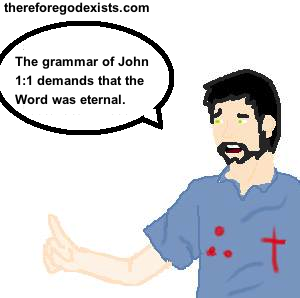 What does John 1:1 mean? The Word was there in the beginning. The Jehovah’s Witness might reply that the Word was there in the beginning because that was when God created him. But the grammar does not permit that interpretation. The tense of the word “was” demands continues action in the past. Since we are referring to “the beginning,” we are led irrevocably to the conclusion that the Word existed in eternity past. Thus the New Living Translations is vindicated. “In the beginning, the Word already existed.” But this raises a theological question. How could another exist alongside God from eternity past?

It might surprise you to know that this is a point of contention. Since some people want to say that Jesus is the person of the Father, they will deny the plain reading of this verse. Rather than being face to face with the Father, the Oneness Pentecostals will say that Jesus was a plan or a forethought in the mind of God. But the text seems to disconfirm this interpretation. The last line of the John’s prologue seems to deal the death blow to this verse. It reads, “No one has seen God at any time. But the only begotten God, in the bosom of the Father, he has explained him.” (v. 18). What does John 1:1 mean? The same as John 1:18. Jesus is the only begotten God, and he is in the bosom of the Father. It would be a challenge for anybody to maintain that Jesus is the Father if their view is based solely on the text.

The Word Was God. This raises the question about the authority of Scripture. Since this author assumes that the Scripture is true, and John assumed that the Scripture is true, we need to keep another truth in mind as we interpret this passage. There is only one God and there is no one beside him (Isaiah 43:11). The gods of the nations are idols (Psalm 96:5). So if John is saying that the Word is God, we cannot allow our interpretation of that to extend beyond that truth. There is only one God. Yet the Word was God. He could not be a god, as the Jehovah’s Witnesses will render this verse.

But of course, doctrine does not render translations. The words do. So the reason that Jehovah’s Witnesses think that this should be rendered, “and the word was a god,” is that there is no article before the word ‘God,’ while there is one before ‘Word.’ However, I would object to that, the presence of the article only goes to show that the Word is the subject of the sentence. John could have put an article in front of God, the verse could have been rendered, ‘God was the Word.’ Thus rendering God and Word interchangeable, hence, teaching modalism. But John was not teaching modalism. What does John 1:1 mean? He put the article exclusively in front of Word because that was the best way to express that the Word was God. [1]

What does John 1:1 mean? John wrote his gospel about the nature of Jesus Christ. He utterly refutes the various heresies that sprung up throughout the centuries. Whatever Jesus says, we need to interpret it through the lens of this prologue. Jesus already existed when the beginning arrived. He was never created. He was with God the Father, and he was God. In this, we have a powerful case for the trinitarian nature of God. There is one God who is eternally present in three persons: the Father, the Son, and the Holy Spirit. John 1:1 refutes the view that Jesus is the Father and it refutes the view that the Word is merely a god.