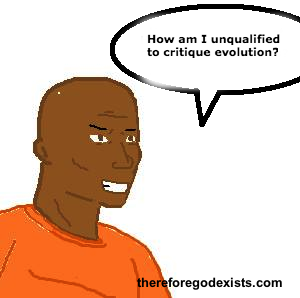 A sophomore is somebody who has a fact or two memorized and yet feels cocksure about her conclusions. She will tell you very matter-of-factly her immovable conclusions about controversial issues that are hotly debates among scholars. Of course, one might be willing to excuse the twenty year old in her young zeal. She has simply misunderstood the field and is overstating her knowledge. However, unfortunately, scholars often make the same sort of mistake. They will smuggle conclusions about other disciplines under their scholarship in a different field. A scientist may authoritatively tell her students about biblical theology. Neil deGrasse Tyson may speak about philosophical arguments for the existence of God. In the same way, theologians may speak of the Theory of Evolution. Yet many have explained why theologians are not qualified to assess the Theory of Evolution. 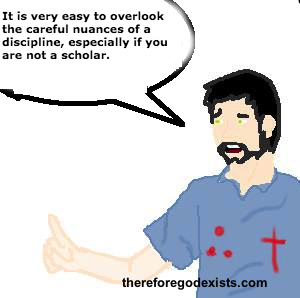 There Are Too Many Careful, Scientific Nuances of Evolution

The reason that creationists are a laughingstock among secular scientists is that they often mount bad arguments based on blatant misunderstandings of the Theory of Evolution. Whether they are equating evolution with atheism, arguing that they need a theory of abiogenesis before evolution can work, or asking why monkeys still exist, the common sense approach to a scientific discipline simply does not work. They can say things like “evolution is only a theory,” not understanding basic scientific terminology. They might posit that the Second Law of Thermodynamics refutes the Theory of Evolution. They may suggest that since evolution is not repeatable (the entire process), it is therefore not scientific. All of these outrageously bad objections have severely impaired the credibility of creationism and very strongly underlined the fact that theologians are simply not qualified to assess the Theory of Evolution. There are too many careful nuances.

This could become clearer if you think about your own discipline. If somebody were to say that they cannot believe that Jesus is God because Jesus prayed, then they would be making an obvious theological mistake. They have overlooked a nuance of Christian theology, namely, the doctrine of the trinity. As one dives deeper into theology and learns more, one will discover more nuances that are established by Scripture which will warrant our attention. If a secular scientist attempts to mount a critique of Christian theology, you can probably expect that it will not be very impressive because it is not her field. The same basic misunderstandings that will cause hands to rise in Sunday school lessons, quickly clarified by the instructor (hopefully), will be the same arguments that the secular scientist might use against Christian theology. Criticizing another discipline is no easy task. Previous attempts to critique the Theory of Evolution establish how frequently creationists overlook these careful nuances.

No, Your Presuppositions Will Not Save The Day

There is something about doing theology and philosophy that will make people a little too brazen. That is not only a problem for theologians, either. A scientist who is laughing dismissively about Christian theology will very easily overlook the centuries upon centuries of intellectual tradition represented by the Christian church. They will breeze right in and think that they can refute everything with something childish like “Who created God?” This common sense approach to critical thinking is not doing anybody any favors. Theologians are guilty of the same sort of thing. Many think that they can resolve the entire controversy with a silver bullet, namely, their presuppositions.

However, I think that the reason that groups such as Answers In Genesis will argue presuppositionally is that they are not actually doing science. If you assume your conclusion and say that all data has to be within the confines of your conclusions, then by admission, you have abandoned the scientific method and you are not doing science. I expanded on this point in my article Is Young Earth Creationism Science? While Answers In Genesis may employ trained and qualified scientists from legitimate universities, they are not actually practicing science because they admit that they assume their conclusions. So, far from saving the day, these presuppositions actually devastate the case against the Theory of Evolution.

Write This 500 Times On The Chalkboard: Evolution Is Not Atheism

There is a sense in which I can understand the urgency against the Theory of Evolution. I think that many are combatting the doctrine that man is just an animal. If man is an animal, then man does not actually have intrinsic moral worth. This would reinforce the culture of death, permitting atrocities such as abortion. If that were what evolution were saying, then the theologian would be qualified to assess it because they would be assessing an alternative anthropology. The Bible says that man is made in God’s image (Genesis 1:26-27) and therefore is valuable. There is a sense in which I can understand how theologians would be alarmed by the idea of atheism penetrating secular schools in the form of a science.

Couldn’t The Theologian Object That It Puts God Out Of Work?

The fact that we have a natural explanation for something that has traditionally been ascribed to God might seem a little disturbing to some people. It is almost like we are slowly pushing God out of the picture. I think that this is a naive way for us to think about science. Learning about scientific mechanisms does not show that God is unnecessary. It only shows what tools God used to bring about the universe. That is not to say that God is superfluous. Imagine that God put a pot of water on a stovetop. The scientific mechanisms might be sufficient to explain the boiling water, but that will not make the efficient cause – God – superfluous. There are different levels of causality. But the fact that we allow that natural processes produce an effect such as biological diversification does not entail that naturalism is true.

But Can’t A Theologian Speak To What The Bible Says About Evolution?

First, to what extent does science inform faith and our interpretation of Scripture? We have verses that seem to represent the author’s likely view that the earth was flat and that the sun rotated around the earth. But our understanding of 21st century science has established the spherical earth and heliocentrism as immovable facts. The literal interpretation does not even get a hearing. The four corners of the earth absolutely must be metaphors. We may say that our interpretations are free from man’s science, but the truth is that science frequently informs us. So, what about the Theory of Evolution? What about science? If it establishes an old earth, then perhaps the reasonable theologian would begin to rethink her interpretations.

Further, confronting only the biblical data, the reasonable theologian would likely recognize that there is no conflict with an evolutionary history. There are only a handful of relevant texts, most of which are either obscure or full of metaphors. While Genesis 1 certainly seems to be outlining real 24 hour days, there are also indicators that the account is probably metaphorical. For example, a “day” has no meaning without the presence of the sun. God could certainly count the passing seconds and mark each day without the sun, but that is not how the text makes it sound. Even without the sun, it still uses the “morning and evening” indicators, suggesting that there is light from the sun before the sun existed. When the author finally says that the sun is created, he also says that days are created (Genesis 1:14). But if that is the first separation of day and night, then what are we to think of the separation of day and night in the prior days? This is just one of many reasons that the wise theologian will recognize that the Bible is far from offering a clear, scientific history in Genesis.

Why Theologians Are Not Qualified To Assess The Theory of Evolution

This should not be taken as an unreserved endorsement of the Theory of Evolution. Worthy critiques have emerged from good philosophers and scientists. If you listen to William Lane Craig debate Francisco Ayala, you will hear thoughtful interaction with the Theory of Evolution. Similarly, Darwin’s Doubt by Dr. Stephen Meyer is a legitimate work of scholarship. I am not saying that if you are a creationist, you need to shut your mouth. Some really are qualified to thoughtfully interact with this scientific discipline. But many (especially those only trained in theology) are doing a disservice to creationism as a movement. The common sense approach is not helpful.

Recommended Reading:
The Case For Animal Death Before The Fall of Man
Is The Story of Noah Literal?