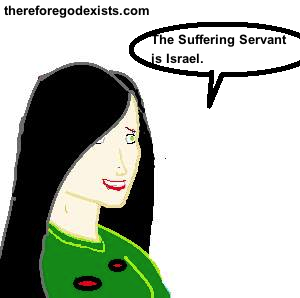 Christians who want to defend their faith often will appeal to fulfilled prophecies in the Old Testament, knowledge of New Testament revelation that would not be there absent divine inspiration. Of course, the Jews often stand ready to take the Christians to task, because they do not believe in the inspiration of the New Testament. So many of their interpretations are specifically opposed to Christian theology. In particular, I have Isaiah 53 in mind, which, if somebody with any knowledge of Christianity read, they would assume that it was referring to Christ. 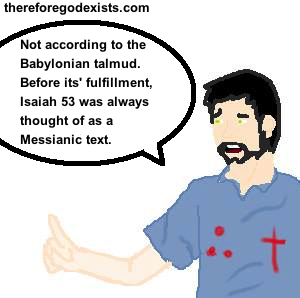 Before Christ, Judaism Viewed This As A Messianic Text. Modern Jews will deny the Christological interpretation of the verse specifically as a response to Christian interpretation (comparable to their reading of the plurality of majesty in Genesis 1:27). They do not want to concede that it is referring to the Messiah because that is just what the Christians are saying. Since it so closely corresponds with Christian theology, they must reject it as referring to the Christ. But this close correspondence with Christian theology was thought to be truly Messianic for centuries prior to its’ fulfillment.

As the Babylonian Talmud reads (Sanhedrin 98), “The Messiah, what is his name? The Rabbis say, The Leper Scholar, as it is said, ‘surely he has borne our griefs and carried our sorrows: yet we did esteem him a leper, smitten of God and afflicted.” The Babylonian Talmud is authoritative Jewish tradition. Who is the suffering servant? Israel or Jesus? According to orthodox Jewish tradition prior to the coming of Christ, it was the Christ.

The servant in prior chapters is distinct from Israel. There are several discourses about the servant in the later chapters of Isaiah, the NASB titling the chapters ‘God Helps His Servant’ (chapter 50), ‘The Exalted Servant’ (chapter 52:13-15) and finally ‘The Suffering Servant,’ (chapter 53). One can hardly blame the rational man for thinking that these are all the same figure. Beginning in Isaiah 49:5, the servant is talking, and he says “The Lord, who formed me from the womb to be his servant, to bring Jacob back to him, so that Israel might be gathered to him.” This servant seems to be one who is distinct from the nation of Israel.

He goes on to say, (v. 6) “I will also make you a light of the nations…” (v. 8) “I will keep you and give you a covenant of the people…” I do not want to be guilty of reading into the text, but it seems to me that Messiah of the Jews is a light to the nations. Billions of Gentiles have turned to the God of Israel and worshipped him. Has this not been fulfilled? Who is the suffering servant? Israel or Jesus? This text can only be referring to the Messiah, and was plainly fulfilled in the conversion of billions of Gentiles across the world.

The text of Isaiah 53 favors a Christological interpretation. Verse two reads, “For he grew up before Him like a tender shoot, like a root out of parched ground.” This will ring out to anybody familiar with Messianic prophecies. The Messiah was commonly referred to as a shoot, or a branch, or a root. Isaiah 11:1 reads, “Then a shoot will spring from the stem of Jesse…” (v. 10) “In that day the Root of Jesse will stand as a banner for the peoples; the nations will rally to him, and his resting place will be glorious.”

Zechariah 3:8 “I am going to bring my servant, the Branch.” 6:12: “‘Here is the man whose name is the Branch, and he will branch out from his place and build the temple of the LORD.”

This was a common idiom always referring to the Messiah. Who was the suffering servant? Israel or Jesus? I ask. One cannot objectively look at the text without seeing the obvious Christology.

The text of Isaiah 53 does not favor the personification-of-Israel interpretation. There are attributes of the suffering servant that Israel just does not have. The Suffering Servant was righteous (53: 11), and was never disobedient (50:5). But, almost as bad as the Gentile nations, Israel cyclically turned away from God in disobedience. Isaiah 1:4 accuses Israel, “Alas, sinful nation, People weighed down with iniquity…” It cannot be called righteous, just as the Gentiles cannot be called righteous (note: this is not an indictment against Israel alone). For this reason, the suffering servant must not be Israel.

Secondly, the Suffering Servant bore the penalty for “my people.” (v. 8). He died in their place, taking upon himself the penalty that they deserve. But who are “my people,”? Well, the answer would be… the people of Israel. So if this is referring to Israel, that would mean that Israel is suffering for Israel. The stroke was due to Israel, and Israel stepped in and took the blow in substitute. I am not sure if that is an astute exegesis.

The Suffering servant was buried (v. 9). Israel has been thrown into exile, but they were never buried, assigned a grave, thrown down into Sheol. They were not given a rich man’s grave. One might be inclined to compare this to the Babylonian Captivity, in which they were taken away from their home. But the verse goes on to say that he was given a rich man’s burial specifically because he had done no violence and there was no deceit in his mouth. I would repeat Isaiah’s indictment against Israel, “sinful nation… weighed down with iniquity… sons of those who act corruptly…” (1:4).

Who is the suffering servant? Israel or Jesus? How ironic it is that traditional Judaism believed and taught that the suffering servant was the Messiah until the very day that it was fulfilled. When their traditions were fulfilled, they instantly disconnected themselves from them. Now they argue that it is a personification of Israel. But that just does not fit in the text. The reason that traditional Judaism always taught that this was a reference to the Messiah is that it is the only interpretation that is faithful to the text.