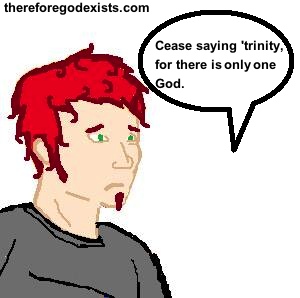 Does the author of the Qur’an understand the trinity? Christians are often told that nobody can; the trinity is confusing and counter-intuitive. Although, if the Qur’an were truly divine in origin, the author (Allah) would comprehend the mystery of the trinity and would be able to fully expound upon it. Therefore not only would the author be able to represent the teaching accurately, he would also be able to refute it, assuming unitarianism. What strikes me though is that as I read the Qur’an and the Sunna, I struggle mightily to find a single verse that suggests that the author understands what the trinity is. 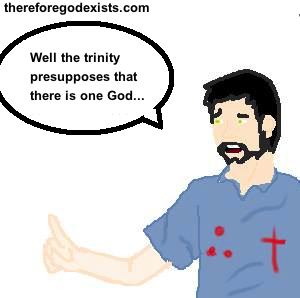 Is that difficult to grasp? Surely we cannot indict everyone who does not understand it. Some people may accidentally misrepresent it, even if they have the best of intentions. Well think of it like this. God would understand, right? God would understand that the trinity teaches that there is one God who is eternally present in three persons. But in the Qur’an, the author does not seem to understand. He utterly misrepresents the doctrine of the trinity. If the author was God, he would not have erred in such a way. Therefore, the Qur’an cannot be authored by God.

The Qur’an Teaches That The Trinity Is Polytheistic That is not to say that it teaches that it is polytheistic in all but name. Rather it teaches that the trinity is outrightly the view that there are three gods. It never bothers to address the most basic confession of the Christian, that is one God, and three distinct persons within the Godhead. So in this way, the author of the Qur’an completely misrepresents the doctrine of the trinity.

Qur’an 23:91 associates God’s having a son with polytheism and raises a few philosophical difficulties. “No son did Allah beget, nor is there any god along with Him: (if there were many gods), behold, each god would have taken away what he had created, and some would have lorded it over others.” Does the author of the Qur’an understand the trinity? Well as Doctor James White said, we are still left looking for the first indication of that. The Qur’an’s central and repeated argument against the trinity is, ‘there is only one God,’ which raises confusion, because the trinity presupposes that there is only one God.

Who Are The Gods Within The Trinity? Further, the Qur’an fails to recognize the Holy Spirit as a member of the trinity. Rather, Allah puts on a big show in addressing Jesus, and says, “O Jesus, Son of Mary, did you say to the people, ‘Take me and my mother as deities besides Allah ?'” Now many Qur’anic commentators suggest that this is supposed to take place during the end-times. Jesus will come back, and will speak to God, who will reply with voices from the heavens before Christians. Allah will affirm that we ought not take Jesus and his mother as gods.

I will ignore the polytheistic implication (as Jesus is not one of the gods, but is God) and point out what the Qur’an conception of the trinity is. We do not see Father, Son, Holy Spirit. Instead, we see, Allah, Jesus, and Mary, a view which no Christian, anywhere, would affirm. It seems that just as the author of the Qur’an included apocryphal stories of Jesus indiscriminately (Qur’an 3:46,49) so he also saw all of the glorified images of Mary holding Jesus. He heard all of the things that the Christians had to say about Mary in that day and assumed that they took her for a goddess.

Does The Author Of The Qur’an Understand The Trinity? It seems to me that the author should have checked his research. When he heard Christians speaking, he should have asked what they meant, rather than just making assumptions. I can just imagine how embarrassing and silly he must have looked, as I have encountered people like that. When I say something, and they just completely misunderstand me, and go off on a long diatribe without asking any questions. Since they utterly refuse to ask any questions or seek to understand me at all, they just talk passed me, they ignore everything that I say and are only interested in refuting me. But since they did not understand me in the first place, they refute a position that I did not even hold. This is the height of intellectual dishonesty. This is Muhammad.

Now the good Muslims will reply that Muhammad did not write the Qur’an. Allah did, and Muhammad was a passive recipient. But why did Allah neglect to check his research? You say that the trinity is difficult to understand, but surely, Allah understands it. If Allah wanted to argue against the doctrine of the trinity, he could have. If Allah wanted to refute the view that there was one God who was eternally present in three persons, he could have. If Allah were the one who wrote it, he would have understood. But since the Qur’an displays a surface misunderstanding of the doctrine of the trinity, which even a layman could correct, we are left with the hard conclusion that Allah cannot be the author of the Qur’an.