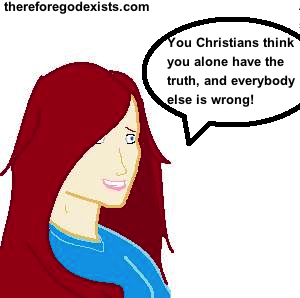 One of the greatest marks of what is regarded as tolerance in our society is when we refuse to deny the claims held by an individual. When somebody says that they adhere to a specific set of dogma, that is to be regarded as unquestionable, respectable, promotable, and perhaps even true. In fact, people often regard the more enlightened view to be that which claims that everything is true. Everything is true, and everybody is happy, and nobody is held accountable. All religions are an equal path to God. In fact, even some Christians are willing to concede this point, saying that those who do not consciously know Christ are covered by his sacrifice. Is this modern evolution closer to true? Could all religions be true?

More frequently, we are seeing those signs that use all of the religious symbols to spell out the word “Coexist,” or “Tolerance.” People will take the obvious similarities of Christianity, Islam, and Judaism as an excuse to mesh them together, arguing that there should be no dispute between these three faiths, because they essentially teach the same thing, and all of them lead to the same God. In religion, the faith known as Baha’i is the embodiment of this belief, arguing that all religious beliefs are of equal merit; the only clause being that we must drop all claims of exclusivity. 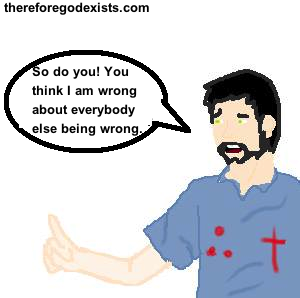 This seems to be the case in the contemporary west. It is still the norm, I think, to hold belief in a sort of generic conception of God. People certainly do enjoy hearing that God is helping the football player win the big game, that God is helping them to find their significant other, that God has a wonderful plan for them to prosper in wealth, health, fame and glory. People want to know that God has a plan for them, so that as it does not interfere with their plans. This is the normal religion of the non-religious person in the west. However when we start saying something like, Christ is the only way to the Father, or if you deny Christ, you deny the Father, people become very hateful, calling names such as bigot, homophobe, and so forth (ironically, a bigot is a person who is devoted to their own opinions or prejudices, such as the prejudice against Christianity).

But what really matters, I think, is what is true. So could all religions be true?

Sure, they can believed simultaneously, but that is not the same as being objectively true. Muslims believe that Jesus did not die, and therefore also did not rise from the dead. Christians believe that Jesus did die, and also did rise from the dead. Both of these statements cannot be true. There either was, or was not, an actual historical event wherein Jesus Christ was murdered under the authority of Pontius Pilate, and then rose from the dead. It may be easier to think of it in terms of somebody that we know, or a funeral that we have been to. That person either died, or is still alive, but not both.

The reason that this is such a difficult issue is because of how strongly it is believed by people. We want to be tolerant of their beliefs, and even affirm that their beliefs are true. But no matter how strongly somebody believes something, that does not make it true. A person can fool themselves into believing that their mother is still alive, as a coping method or what have you, but if she is dead, then no matter how strong the belief is, she is dead. But for us to say that living out that lie is okay is extraordinarily dangerous.

So the same with religious belief. We cannot say that two contradicting things are true, just because people want to believe it. We must encourage a search for objective truth.

An appeal of this view to many people is that it seems to be the more tolerant view. It seems by many to be more open-minded than the rest. It makes everybody happy, in that we do not have to deny the truth of anybody’s religious view. Perhaps on the surface, we can understand why it is that people may be attracted to this sort of belief system. We just do not want to offend anybody, and we just do not want to argue and we do not want to tell anybody that they are wrong, or even believe that they are wrong.

In fact, if you think about it, the view that all religions are correct, is itself a very narrow view. People who make this claim want us to believe that they alone have found the truth; they have seen through the charade, and all of the world religions who believe otherwise are mistaken. If you want to adhere to this belief system, you have to drop your previous beliefs that the other religions are false. It therefore seems to me that this view is no less exclusive than the other belief systems!