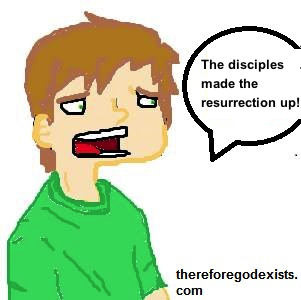 Since the resurrection of Christ, a plethora of bad explanations have arisen out of liberal scholarship that attempt to explain the surrounding data without the view that Jesus had been raised from the dead. In fact, this debate arose almost immediately, for when the tomb of Jesus was found empty, the disciples were instantly accused by the Jews of stealing the body and inventing the resurrection. In later centuries, many alternative explanations have been concocted, but none of them have really been firmly established in the circles of New Testament scholarship. But of course, even if they cannot justify it, the most common thought of the non-believer is that the resurrection was an invention of the disciples. So did the disciples make up the resurrection? 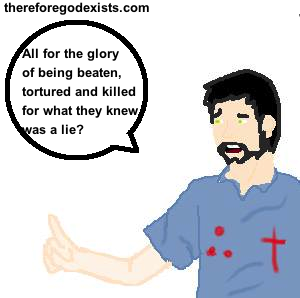 It seems that for anybody who thinks about the gospel narratives, if they want to reject them as untrue, they have to commit themselves to the idea that somehow, the apostles just made up the resurrection. That is why among laymen, we find that many maintain some old abandoned theory meant to explain away the surrounding data, such as the idea that the apostles derived belief in the risen from Lord because they read Pagan myths, or the view that Jesus did not really die on the cross, or the view that the apostles stole Jesus’ body. Of course, such schools of thought are not defended on contemporary scholarship, but they are what we find within the internet infidel blogosphere.

There Was No Motive

In a criminal investigation, when a detective is considering a potential suspect, they will look to see if there was any motive for the crime. When it is determined that there was a motive, the suspect becomes more firmly planted on the detectives’ radar. For example, suppose a man is found murdered, and it is soon after discovered that he was involved in an affair with a married woman. The husband would have had a motive to murder this man. However if there is no motive, then it becomes significantly more plausible that this person did not commit the murder.

We can apply the same principle to historical figures in regard to the actions that they determined. The apostles had no motive to invent a resurrection story. In fact, they had motive to just move on with their lives and forget about it. In traditional Judaism, the Christ was thought to come as a powerful military leader, free the Jews from the Roman Empire, and establish his kingdom on earth. When a false Messiah arose, the Jews dealt with them in the same way: crucifixion. In doing so, they showed that this person was a liar and a heretic, and even under the curse of God. So when Jesus was crucified as a criminal, the apostles were given the impression that he was a liar, a heretic, and under the curse of God.

Their leader was dead. The disciples ran away, Peter denied knowing him (John 18:15-27), and Thomas said that he would not believe in the Lord unless he appeared to him and allowed an examination (John 20). They had no motive to think that Jesus was the Christ, and every incentive to think that he was just another false Messiah.

One of the greatest difficulties of explaining away the resurrection in purely naturalistic terms is the well established (in contemporary scholarship) surrounding data that is best explained by the resurrection hypothesis. When I say that, I mean that there are a number of events that occurred that it make it much less likely that the apostles just invented the story, and more probable that the resurrection actually occurred. Among them, the post-mortem appearances of the risen Lord and the empty tomb of Jesus are the two that I will look at.

Under different circumstances, in different locations, different groups of people had experiences of Jesus Christ alive, after his death. The atheist New Testament scholar, Dr Gerd Ludemann, explained that this fact is historically undeniable (he just regards the experiences as hallucinations). Now if it is the case that the disciples were lying about the resurrection, they would have had to persuade hundreds of people to get in on their lie, some of them government officials, others Jewish Pharisees who persecuted the church.

However the Jewish Sanhedrin could have refuted the claims of the people simply by pointing to the tomb of Jesus and exposing his body for all to see. Despite that, the tomb was found empty on the Sunday following Jesus’ death. In the words of the Austrian historian, Jacob Kremer, “By far, most historians hold firmly to the reliability of the biblical account of the empty tomb.”

Therefore if we are to say that the apostles made up the resurrection story, then we have to say that they stole the body from the tomb. Therefore it seems to me that for them to invent a resurrection story would entail maneuvering passed the guard, persuading all of the apostles (including the mourning women, who likely just wanting to move on with their lives and accept what happened), concocting an elaborate plan, convincing hundreds of people to claim that they had experiences of Jesus, risking their lives and the lives of their families, and abandoning their lifelong religion and relationship with God. Why? No reason.

Did the disciples make up the resurrection? It seems to me to be much more plausible to say that God raised Jesus from the dead.