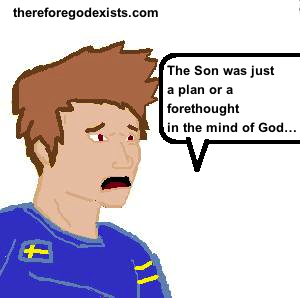 I usually avoid exegetical articles for the sole reason that they do not attract a lot of attention. Most of my articles are more topical, and like my cohort Evan Minton of CerebralFaith.blogspot.com, I weave in the relevant selected Scriptures throughout. So in today’s article, What Does Philippians 2:5-8 Mean? I am doing something a little different. I am simply looking at the text of this passage, summoning the theological nuances to shine forth so that the Holy Spirit may illuminate this passage for you, and for me. 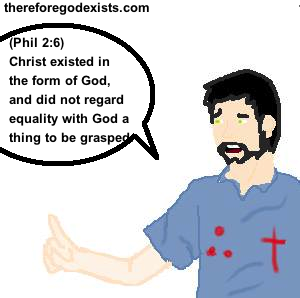 I would first point out that most scholars regard this passage as pre-Pauline. Paul received or learned this hymn from his contemporaries, namely, Peter and James (Galatians 1:18). So the theology that is found in this hymn comes before Paul. We cannot say that Paul invented it or distorted the early Christian teachings (as Muslim apologists will assert). This song came before him. This is highly significant because it means that what we find in this passage represents the beliefs of the earliest Christians. Paul’s views were representative of the rest of the church, and this hymn evidences that. So then, what does Philippians 2:5-8 mean? First, take a look at the passage with me, and also, I will examine verses 10-11.

V. 5-8: Have this attitude in yourselves which was also in Christ Jesus, who, although He existed in the 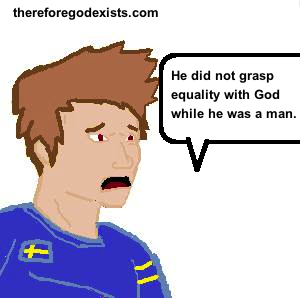 form of God, did not regard equality with God a thing to be grasped, but emptied Himself, taking the form of a bond-servant, and being made in the likeness of men. Being found in appearance as a man, He humbled Himself by becoming obedient to the point of death, even death on a cross… (v. 10-11) so that at the name of Jesus every knee will bow, of those who are in heaven and on earth and under the earth, and that every tongue will confess that Jesus Christ is Lord, to the glory of God the Father.

“…Christ Jesus, who, although He existed in the form of God, did not regard equality with God a thing to be grasped.” 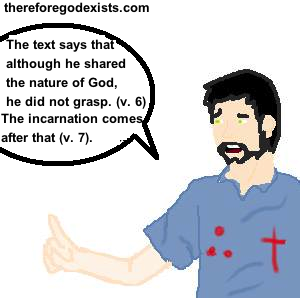 This word “emptied,” is translated from the Greek, “ἐκένωσεν” or sometimes transliterated, “kenosis.” It is from where we derive the doctrine of kenosis. It literally means that Jesus emptied himself, he was deprived of content. When Jesus became a man, he emptied himself of his divine attributes and his divine will. So rather than being omnipotent, he relied on the miraculous power of the Holy Spirit. He was a human being. He was the human image of the invisible God (Colossians 1:15). He was the fulness of the trinity, the one and only God (for there is only one God [Deuteronomy 6:4], eternally present in three persons [Hebrews 1:8, Acts 5:3-4, Matthew 28:19]) in human flesh (Colossians 2:9). The consciousness of God the Son was transferred to the flesh of a man.

Lest you think that this is just theological wrangling, I point you back to the text. Jesus was in the form of God, did not regard equality with God a thing to be grasped. Jesus was both God and with God (John 1:1-2). What does Philippians 2:5-8 mean? It means that earliest Christians sung hymns of the incarnation and the trinity.

“…Being found in appearance as a man, He humbled Himself by becoming obedient to the point of death, even death on a cross…” Note how the status of Christ descended. In the beginning of the song, he is God, sharing the very nature of God the Father, in eternal glory. He descends to not grasping the equality that he had. He descends again to the shame of a human being. He paradoxically departs from this eternal and everlasting state of eternal glory and kingship and becomes a man. Then he humbles himself to the lowest possible status of a human being.

Crucifixion is a stain on the soul of humanity. It is the most gruesome form of capital punishment that men have ever enacted. God descended to it and absorbed it. When Jesus was crucified, it pleased God the Father to crush him (Isaiah 53:10), because on that cross, his love was on display. All of God’s wrath that we deserve was poured out upon him. Christ Jesus descended treacherously, diving into the portal from Heaven to crucifixion, leaving his divine rights behind, leaving his power and glory, and becoming a man, obedient to the worst form of torture imaginable. What does Philippians 2:5-8 mean? This verse means that God died the death that you and I deserve (1st John 2:2). Three days later, he rose from the dead. “For God so loved the world that he gave his only begotten Son, that those who believe in him shall never perish but have eternal life.” (John 3:16)

“At the name of Jesus Christ, every knee will bow and tongue confess that he is Lord.” Paul is quoting Isaiah 45 and applying it to Jesus. In Isaiah, YHWH says of himself, “to me, every knee will bow, and every tongue will swear allegiance.” Paul takes the words of God and applies them to Jesus. Is it not clear that Paul regards Jesus as God? Paul believed that Jesus was YHWH, the God of the Old Testament.

Isaiah 45:21-23
“Is it not I, YHWH?
And there is no other God besides Me…
…A righteous God and a Savior;
There is none except Me.
Turn to Me and be saved, all the ends of the earth;
For I am God, and there is no other.
I have sworn by Myself,
The word has gone forth from My mouth in righteousness
And will not turn back,
That to Me every knee will bow, every tongue will swear allegiance.”