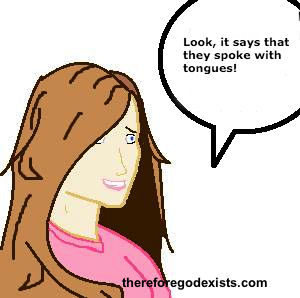 Non-Pentecostal Christians who visit a Pentecostal church will usually be very confused by their practice and behavior. Their church services are not solemn, and they leave little room for quiet contemplation. The parish is encouraged to shout with joy, dance, and run laps around the room. As the shouting commences, it quite often trails off into incomprehensible speech that sounds something like a zombie’s favorite song. This phenomenon is otherwise known as glossolalia, or speaking in tongues. Some Pentecostals use tongues as a measurement of spiritual maturity or an advanced spiritual state. God shows favor by granting tongues to some of his people. In more extreme sects, it is thought that tongues are a necessary characteristic of salvation (I explored this idea in my article Are Tongues Necessary For Salvation?) What are we to make of this? Are Pentecostal tongues biblical? 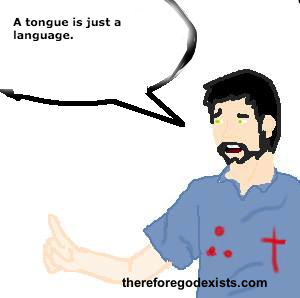 Whatever impression one may have of ecstatic speech, it is difficult to avoid the concept in the New Testament. If you open the book of Acts, you will see that sometimes when people received the Holy Spirit, they began to speak with other tongues. Many Christians will maintain their resistance to the practice of Pentecostal tongues by suggesting that the apostolic gifts, including tongues, ceased with the death of the last apostle. While that may be the case, that is not the premise of this article. Also, that would still leave us with the uncomfortable conclusion that the early church spoke in what they regarded as the language of the angels. If that is true, then it is true. God has performed other miracles in the Bible. But is it the case? Are Pentecostal tongues biblical? 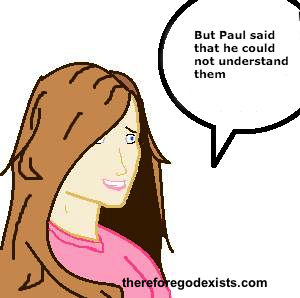 If you were to ask a Pentecostal to explain their belief in the existence of tongues, they would likely say that it is the model provided throughout the book of Acts. Supremely, it is found at the birth of the Christian church, at Pentecost. The Holy Spirit fell upon the people, and they were baptized in the Spirit. As evidence of this baptism, they began to speak with other tongues. This is undeniable. However, I would be so bold as to suggest that these tongues were not other-worldly. They were distinct and recognizable human languages, given for the preaching of the gospel to all nations. 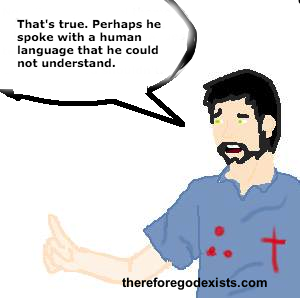 The inclusion of the Gentiles into the plan of salvation was a major theme in the New Testament. While Christianity is primarily a Gentile religion today, it began as a Jewish sect. These Jews had a lot of nationalistic pride. Gentiles were not allowed in. That is why Paul said that it required courage for Isaiah to preach the future inclusion of the Gentiles (Romans 10:20). The church received these new languages as part of that narrative. They are preaching the gospel to all nations (Matthew 28:19). If they are going to do that, they will need to learn some new dialects. 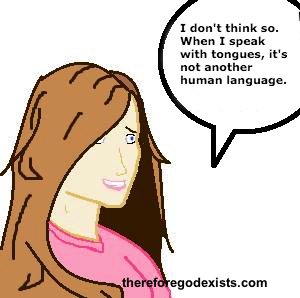 This interpretation enjoys the support of many great saints throughout church history. As Saint Augustine said, “In the first days that the Holy Spirit fell upon the believers, and they spoke in tongues that they hadn’t learned, as the Spirit gave them to speak. These signs were appropriate for the time. For it was necessary that the Holy Spirit be signified thus in all tongues, because the gospel of God was going to traverse all tongues throughout the earth.” 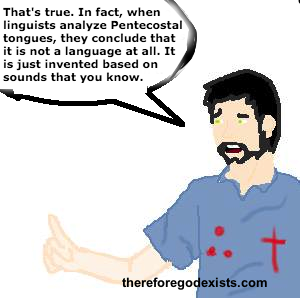 This is not just speculative. Acts 2 specifically makes this point. In verses 5-11, people from different regions receive the gift of tongues. The text specifies (in verse 11), “We hear them declaring the wonders of God in our own tongues!” One may be inclined to suggest that these people were speaking in an ecstatic language, and the onlookers understood all of them in their own native language. But that seems more like an interpretive maneuver than anything else. It is not derived from the text. Second, even if you are not inclined to concede the argument, it must be conceded that both interpretations are valid. It is perfectly valid to interpret the tongues Acts 2:5-11 as referring to other human languages. Are Pentecostal tongues biblical? Minimally, this passage shuts down the argument for ecstatic speech from Acts 2. This means that the primary text supporting Pentecostal tongues is ambiguous at best.

As the practice of tongues spread throughout the early church, there were several problems. People began to speak out of order. There were several people speaking in tongues in the church at one time, such that it was not even edifying. So, Paul wrote in his first letter to the Corinthians that they need to be more organized about how they speak in tongues. But throughout that discourse, he wrote a few things that seem indicative of Pentecostal tongues. He wrote in verse 2, “For anyone who speaks in a tongue does not speak to people but to God. Indeed, no one understands them; they utter mysteries by the Spirit.”

Similarly, the Bible speaks of the Holy Spirit interacting with Christians. He empowers us and comforts us through difficult trials. Pentecostals believe that he guides our prayerful petitions by speaking through us. In support of this doctrine, they will often appeal to Romans 8:26. Paul wrote, “In the same way, the Spirit helps us in our weakness. We do not know what we ought to pray for, but the Spirit himself intercedes for us through wordless groans.”

However, it seems like one would only conclude that this was a reference to ecstatic speech if they brought that presupposition to the text. There are better ways to interpret this passage. Often, during difficult times, one may not know how they should pray or what they should say. During those lamentations, our prayers may seem foolish and timid. But, Paul comforts his reader by informing them that the Holy Spirit will translate our prayers into the will of God. When we do not know what to pray, we should just say what is on our heart, and the Spirit will bring a better petition to throne of God. After all, the text says that this intercession is a wordless groan. Tongues are composed of words. Are Pentecostal tongues biblical? It is left without any support in Acts 2, 1st Corinthians 14, or Romans 8:26.

Have you ever heard somebody speaking in tongues? If you have never visited a Pentecostal church, it is quite an experience. There are times in which it may seem funny and others wherein it is just depressing. Sometimes when the parishioners begin speaking in tongues, it becomes so obvious that it is nothing but gibberish. You do not need a professional linguist to analyze it. They are often just screeching. They might say, “KAKAKAKA.” That is not meant to be an amusing exaggeration. Visit a Pentecostal church, and you will hear something similar. It is just not a language.

Languages have certain characteristics. One can break it down and analyze it. It is something that is real. That is the basis of communication. If there is not a consistent and discernible pattern, then it cannot be seen as a language. You would need to call it something else, like “expressions.”

When linguists analyze the practice of speaking in tongues, their conclusions are not surprising. Professor William Samarin of the University of Toronto wrote that upon analyzing recordings of people speaking in tongues, he gathered that they were all “strings of syllables, made up of sounds taken from among all of those that the speaker knows, put together more or less haphazardly but which nevertheless emerge as word-like and sentence-like units because of realistic language and melody.” He goes on say, “Glossolalia is not a supernatural phenomenon. Anybody can produce it.” (There are even atheists who can still speak in tongues after deconversion!) The Encyclopedia of Psychology and Religion as well as the Cambridge Companion to Science and Religion report similar findings.

Are Pentecostal tongues biblical? If they were, they would be real. They would not be receptive to such easy falsification. If they were biblical, they would not sound like a cluster of consonants. The only way to diffuse this objection is to stop referring to the phenomenon as tongues. Stop calling it a language. Call it an expression.

“But I have experienced it!”

Upon explaining the lack of biblical warrant and the linguistic obscenity that is the glossolalia, many Pentecostals are inclined to point to their own personal experience. They will suggest that they have experienced it. How in the world can you tell somebody that tongues are not real if they have spoken in tongues? Well, that is not quite what is being asserted. Glossolalia certainly is real. But it is not from God, and there is no persuasive biblical warrant for this doctrine.

You are not the only person who has experienced glossolalia. It is a common phenomenon among different religions. New Age religions, Pagans, Hindus, and religions throughout history speak with tongues. It is a common psychological occurrence that often manifests itself in religious practice. Accordingly, I am not denying that tongues exist. I am denying that it is a biblical practice. I do not think that it is demonic. It is probably just something psychological. That is why even non-believers can still speak in tongues. They just need to “turn it on.”

I understand that this is an issue that is deeply personal for many people. For that reason, it is important to point out that the gospel does not hinge on this issue. There are many born again Christians who engage in Pentecostal tongues. But this is unfortunate. As Christians, we should be people who seek after truth. Our experiences and traditions should not guide our interpretation of the biblical data.

Sometimes the passages relating to tongues can be quite compelling. After all, it says that they spoke in tongues right there in text. But what they meant by tongues and what you mean by tongues are different. Your interpretation has been formed by your tradition. This is an easy mistake to make. You have been taught about tongues for your entire life. It never even occurred to you to ask if Paul was referring to another human language. It never even occurred to you that every single prooftext of tongues in the Bible is fundamentally ambiguous.

Now, I encourage you to analyze the biblical data. Read about Dr. Sam Waldron’s Cascade Argument. I encourage you to do these things because Pentecostals and non-Pentecostals have fundamentally incompatible worship services. We may accept one another as brethren, but we cannot worship together. This ecclesiastical difference has created disunity in the body. I ask that you restore unity by abandoning the practice of tongues. Do not worry about speaking in tongues. Focus instead on righteousness and truth.

If you want to read more about this, see my articles Are Tongues Necessary For Salvation? and Should We Speak Out Loud In Tongues?