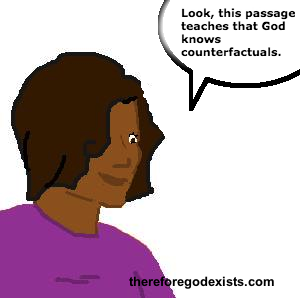 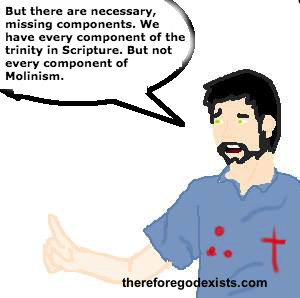 Typically, to the frustration of Molinists, Calvinists will argue that Molinism is nothing more than a philosophical construction. They will suggest that they are doing theology, devoting themselves to God’s word, while the Molinist is conducting man’s philosophy. In this case, philosophy will be a dirty word, defined as something like, “Man’s evil reasoning divorced from the power of the gospel.” I understand why Molinists will be frustrated by this line of argumentation and recognize that many Calvinists really do not have an interest in understanding. Even so, I still do not think that the doctrine of Molinism is in the Bible. When I refer to the doctrine of Molinism, I mean the doctrine that God used his middle knowledge to put men in situations in which they would freely choose to do his will.

Where Does The Text Say It?

The Muslim might raise a similar objection to the doctrine of the trinity. Where does the text of the Bible tell us specifically, “There is one God who is eternally present in three persons”? There is no such text that will establish that premise. The task of the systematic theologian is to compile all of the relevant texts and develop a cohesive model. It establishes that there is one God and that each of the persons of the trinity are God, and that they are distinct from one another. Therefore, we have the doctrine of the trinity. The Molinist will argue that their theology was developed in a similar way. While the text never explicitly says that God used his middle knowledge to put men into situations in which they would freely choose to do his will, it does provide enough components of that doctrine that we can establish it as a biblical fact.

Upon reading the title of this subsection, many Molinists may begin to think that I am misunderstanding or misrepresenting them. After all, there are a host of texts that they will use to establish certain components of Molinist theology. One will be the story of David at Keliah in 1 Samuel 23, in which God clearly expressed knowledge of what would happen given different conditions. Further, God’s knowledge of what would happen seems to be common sense. After all, there are true propositions, such as “If I drove out into traffic, I would crash,” that do not reflect the real world. With that in mind, the Molinist may think it odd that I ask where the relevant texts are. Well, the point I am raising is not that “Middle knowledge is nowhere to be found in the text.” Rather, it is that “the doctrine that God used his middle knowledge to arrange the world so that men would freely choose to do his will” is nowhere to be found in the text.

You might be able to mount an argument that there are some components, but not that the doctrine itself is there. In the case of the trinity, we can actually establish that every necessary component is there. We can establish that each of the persons of the trinity are God, that they are distinct from one another, and that there is only one God. However, even if you establish that God knows counterfactual and that man possesses libertarian free will (the two twin pillars of Molinism), that is still not sufficient to establish Molinism. You would have to say that God used his middle knowledge to put men situations in which they would freely choose to do his will. In response to this point, Zach Lawson of Think Theism said that this was something like saying that God has a hammer and he built a structure – isn’t it just common sense to say that he used that tool to build that structure? Well, I do not know that it is. God has more than one tool. He could have used a different one. Therefore, even if you establish the twin pillars of Molinism, they are still not sufficient to hold the house.

The Law of Sola Scriptura And The Violations of Molinism

Sola scriptura is the doctrine that Scripture is the only infallible rule of faith for the Christian church. Only those doctrines that the exegete can specifically and clearly derive from Scripture are to be thought of as infallible. Since the deity of Christ, the doctrine of the trinity, the doctrines of grace, et cetera, are clearly derived from Scripture, one may appropriately say that they have been revealed by God and as such are infallible. However, doctrines that have emerged as a product of tradition or philosophical theology alone are not members of the same class. For example, a philosopher might develop a coherent method of explaining God’s relationship with time. But that model would not be as firmly established as those doctrines that have been established by Scripture. The philosophical theologian will need to exert vigilance in keeping these doctrines separate in his mind and his theology.

When I was a Molinist, I frequently violated this principle. Like many of my comrades, I argued that the debate between determinism and Molinism could not be settled by Scripture because both perspectives are consistent with the text. If a determinist were to point to a text such as Isaiah 10 or Genesis 50:20, I would eagerly and quickly point out that these texts are consistent with both Molinistic and deterministic perspectives. From a textual point of view, therefore, they would be a draw. It could go either way. However, in mounting this argument, I was violating the law of sola scriptura, allowing a philosophical construction that is developed wholly apart from the text of Scripture to interpret and even override the scriptural data. When an individual uses Molinism to interpret a passage about predestination or soteriology, he is violating sola scriptura, allowing the fallible to trespass on the infallible. At best, Molinism serves as a useful construction in warding off attacks on theism (such as in the problem of evil, for example), but cannot be applied to interpret Scripture.

Appealing To The Best Explanation

The Molinist may well be willing to concede these arguments, agreeing that Molinism is not actually found in the Bible. But, they will argue, neither is determinism. We are just stuck with probabilistic models, and there is nothing that we can really do about it. From there, the Molinist will suggest that the issue must be resolved by appealing to the best explanation. The blogger Evan Minton of CerebralFaith did precisely that in his blogpost titled Is Molinism Eisegesis?. He argued that determinism is not the better explanation because it has a smaller explanatory scope. It cannot explain passages in which God becomes angry in response to sin. After all, God predestined them to sin, so why would he become angry?

But to suggest that determinism has no accounting for these facts might not be reflective of a full survey of the relevant literature, because determinism does have salient interpretations of these passages. From the Bible, we learn that God has what theologians refer to as a “secret will” and a “revealed will.” The secret will is what God predestined to happen, and we do not know about it until it actually happens. But the revealed will is what God has revealed in his word, namely, his law and moral decrees. Sometimes, the secret will conflict with the revealed will. Perhaps the most obvious example of this is in the cross of Jesus. Scripture tells us that Jesus was slain from the foundation of the world (1 Peter 1:20). Yet men actually killed him, and they were sinning against God’s revealed will. The secret will was that the Son of God would be murdered by sinful men, while the revealed will was, “You shall not murder.” In the case of God becoming angry with sin, he is angry because they violated his revealed will, even if his secret will was that they would sin. This answer does seem cogent, being directly revealed from the text of Scripture. Therefore, it would seem that determinism does have the explanatory scope to account for these passages.

This Is Not How Exegesis Is Done

I was hesitant to write an explanation of these passages precisely because this is not how exegesis is conducted. In performing exegesis, one does not conjure up models apart from Scripture and then try to use them to explain Scripture. Appealing to the best explanation when the explanations are not found in Scripture is not how to do exegesis. The way that one resolves these problems is to look to the text and to see what it reveals. If one does not like the answer or if the answer is unclear, that does not permit you to venture outside of the text to find a resolution. Sometimes it is better to not have any answer if the only answer that you have traverses the boundaries that are set by Scripture.

Where To Draw The Line; When It Matters

There is a sense in which the theology of ‘Mere Molinism’ does not even matter to me. For true Molinists, it is an intriguing concept that is worth pursuing in and of itself. These Molinists are sometimes also Calvinists. On the other hand, some Molinists will just use it as a tool to deflect the critiques of Calvinism. Some may disagree with this, but in the case of the former, it does not really matter and it might not even be worth debating. But in the case of the latter, the individual does not seem to care about what Scripture is teaching. For them, Molinism is a resource to make Scripture teach what they want it to teach. In that case, God’s word is not what is being revered. I recognize that a lot of Molinists will read this post and ignore much of what I am saying because I am just Calvi-splaining. But really, I do not care about criticizing Molinism or if somebody believes it. In fact, I would be more excited to find a Christian who believed in Molinism than one who did not think about these things. I only care when it is being used to uproot the authority of Scripture or deflect soteriological arguments. If you are a Molinist just because it helps you to ward off Calvinist soteriology, then there is a serious problem. You would be wise to consider what Paul said in 2nd Corinthians 13:5. “Test yourselves to see if you are in the faith; examine yourselves!

Is Molinism Here, There, Or Anywhere In The Bible?

I do not know that there is any legitimate way to derive Molinism from the text. It may be consistent in some cases, but that is not really an argument that it is true or a good model. As a Protestant, I take seriously the doctrine of sola scriptura. If something is not found in Scripture, then it should not be intermingled with issues of faith without caveat. In summary, you may keep these considerations in mind as you ponder this issue:

• Philosophical theology is conducted within the bounds of Scripture
• Molinism is never spelled out in Scripture
• It is therefore distinct from the trinity
• It is an illegitimate exercise of philosophical theology
• Molinism violates the law of sola scriptura
• Using extra-biblical models to account for Scripture is inappropriate
• Even if it were appropriate, Molinism offers no significant advancement over determinism
• Using Molinism as a resource to deflect Calvinism should be a cause for concern

If you must be a Molinist, then fine. But consider making an amendment such that you avoid mingling it with God’s word. Keep them separate.

Recommended Reading:
Can Man Be Free If Determinism Is True?
Is God The Author of Sin On Divine Determinism?