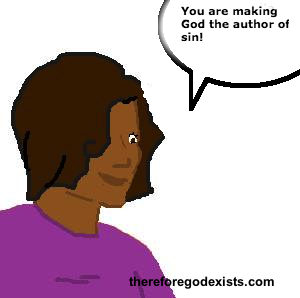 It was not my fault. That is what people often say when they are confronted with a decision that they made. Perhaps a husband was so overcome with lust that he thinks he had no choice but to commit adultery. People often attempt to dodge responsibility for their actions, because if they are not in control, then they cannot be blamed. Some have argued that the doctrine of divine determinism provides a sufficient basis for avoiding any human responsibility. God has ordained everything that will come to pass, and there is nothing that caught him by surprise or was not part of his divine plan. But what about our faults, our sin, our evil? If God ordains everything, then anything that I do will have been foreordained by God. So, how can I really be responsible? Is God the author of sin on divine determinism?

In earlier blogposts such as Is God Evil If Calvinism Is True? and How Job Answers The Central Objection To Calvinism I argued that it is not the place of the creature to stand in judgment over the Creator. This should distill the intellectual objection, but it often leaves people unsatisfied because it does not directly answer the question. In this article, I will outline some of the models of reconciling human responsibility with divine determinism as expressed in Dr. Paul Helm’s book The Providence of God (pages 168-182). 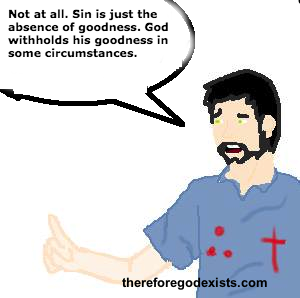 This is because, as Dr. Helm argued, evil is not a thing in and of itself. Evil is the absence of goodness. To say that something is evil is to say that it departs from the standard of righteousness and holiness in God’s character. 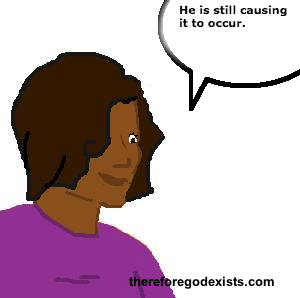 To say that something is sin is to say that the individual has violated God’s laws. It is a deformation, a depravity of the good, a lack of goodness. On this model, it can be said that God has causally upheld all states of affairs, even when they contain the evil actions of men.

But even on this model, is not God still causing evil? Well I think it can be said that there are different levels of causes. First, the human affairs and the decisions that men make cause evil actions. What does it mean, then, for God to uphold these actions without being the direct source of evil? Dr. Helm argued that God determines evil events to occur by withholding his goodness and grace, hence the agents form a morally deficient reason for some action. Accordingly, God is not the author of sin. 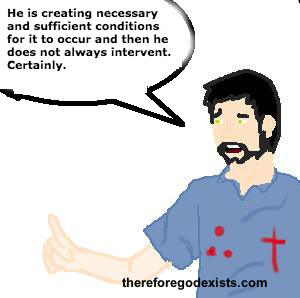 Throughout the ages, Christian thinkers have described God’s causal upholding of evil in terms of divine permission. God permits evil rather than actively causing it. Helm pointed out that there are different types of permission. First, there is general permission, where I permit you to use my car, but do not control your movements. There is also specific permission. Helm supposes that God ordains the necessary conditions for an agent to do something that is evil, and he permits the agent to perform the action. 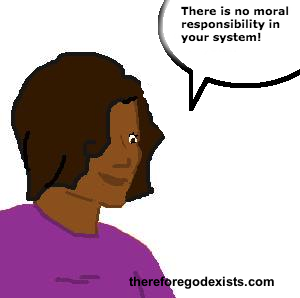 The force of this argument is illuminated when we recognize that there are all sorts of evil actions in the world that God could have prevented. He is all-powerful. He could have prevented the fall of men or angels. He could prevent cruelty by annihilating an individual. In fact, we will probably never know how much evil and suffering has been prevented by God.

Divine permission has committed itself to the great intellectuals of the Christian faith throughout the ages. It was summarized well by Johnathan Edwards, who wrote, “If by author of sin is meant, the permitter, or not a hinderer of a sin, and at the same time, a disposer of the state of events, in such a manner, for wise, holy, and most excellent ends and purposes, that sin if it be permitted or not hindered will infallibly follow, I do not deny that God is the author of sin (though I dislike and reject the phrase).” 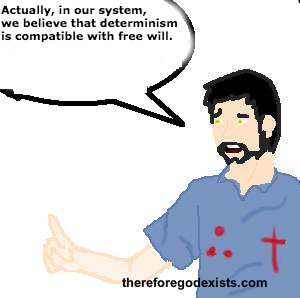 If we do not have freedom of the will, then in what sense can we truly be responsible for evil and suffering? After all, we are not actually making choices. I am not choosing anything at all. I am just a puppet on a string. Well, the puppet analogy is an unfortunate one that has committed itself to Arminian rhetoric. Determinists typically do not believe that there is no free will. Rather, we argue that determinism is compatible with free will. The ability to have made a different choice is not a necessary condition for free will or for moral responsibility. Humans really do have free will and therefore they are morally responsible.

Now, it is beyond the scope of this article to mount an argument for compatibilism (I intend to write an article soon about that topic). I am only pointing out that this is our model. We believe that determinism and free will are compatible. Comparably, Arminians believe that total depravity and libertarianism are compatible. But they appeal to the doctrine of prevenient grace to reconcile these doctrines. Just as I would not say that an Arminian does not truly believe in total depravity just because there are problems with prevenient grace, so also the Arminian should not say charge the determinist with making God the author of sin. Our model necessitates that he is not the author of sin.

But I imagine that many Arminian readers are keen to object to compatibilism and argue that on divine determinism, God would have to be a puppeteer. If that were the case, then God would still not the author of sin. Puppets and robots are not moral agents. If that were the case, we would be in a grand state of self-delusion, thinking that we are making choices when in truth, we are just robotically reacting to stimuli.

Throughout the Bible, we see something of a unity between the evil actions that men will take and the sovereign plans of God. In Isaiah 10, the Assyrian army overran Israel, and they were evil in their intentions. But God brought it about, and his intentions were righteous. Similarly, when the Romans crucified Jesus, they were evil. The Jews who orchestrated the event were behaving nefariously. But God used their actions, predestining it from the foundations of the world (1 Peter 1:20). This is a distinction between different levels of causality. Reformed thinkers often designate them as primary and secondary causes. This is expressed particularly succinctly in Genesis 50:20, which reads, “As for you, you meant evil against me, but God meant it for good in order to bring about this present result, to preserve many people alive.”

Within the primary and secondary causes are different motivations. When Joseph’s brothers kidnapped him and sold him into slavery, they were being evil. But God was being righteous. This probably closely resembles the arguments that I made in the articles that I linked to at the beginning of this article, but God always has a higher, greater purpose for upholding evil in the world. He has righteous reasons and he uses the evil intentions of men.

The concept of primary and secondary causes should not be foreign to any Christian. We all recognize that God uses men to bring about events. When the apostle Paul wrote his letters, Paul was God’s instrument in communicating God’s word to the people. Even as I am writing the words on this page, they are emanating from me, but God has brought about the necessary and sufficient conditions for this state of affairs.

What If We Did Not Have Any Models?

These philosophical constructions are very helpful ways for us to think about God’s relationship with evil and seem to alleviate the charge of being the author of sin. But suppose for a moment that we did not have any models at all. We would still have two truths from Scripture: [1] Determinism is true and [2] human beings are responsible for their actions. Since Scripture is the sole infallible rule of faith for the church (2 Timothy 3:16-17), it would be inappropriate for us to try to refute scriptural truth. We can question it and try to understand and resolve it, but we may not charge God with being the author of sin.

Is God The Author of Sin On Divine Determinism?

There do not seem to be any good reasons to think so. If you allow determinists to define their own terms, they will espouse a compatibility between free will and determinism. Similarly, they will recognize that evil is just the depravity of good. When something evil occurs, God has withheld his goodness, ordaining the sufficient and necessary conditions for some state of affairs to occur. He permits it to occur. Further, even if we did not have any of these models, it would be perfectly sufficient to throw up our hands and trust in the righteousness of God and his truth as revealed in Scripture. As Proverbs 3:5 says, “Trust in the LORD with all your heart And do not lean on your own understanding.”