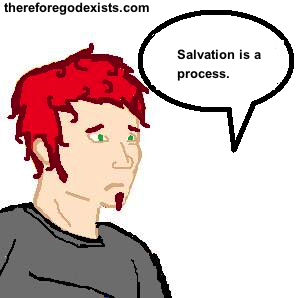 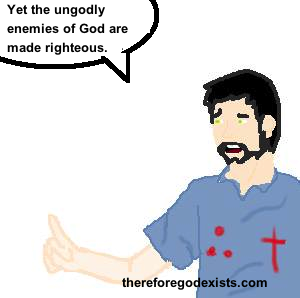 Adherents to this view would draw support from verses like Romans 13:11, which reads, “Salvation is nearer to us than when we believed,” or the classical verses that seem to be suggestive of baptismal regeneration, or that indicate that a person can lose their salvation. But the question is, when such passages are properly understood, may we answer in affirmation to the question, “is justification a process?” Which model of salvation is exegeted from the passages in question? Is a person saved in an instant, or is justification a process?

Enemies of God are made righteous. The gospel is not a story of righteous people coming to God, laboring for righteousness. It is not a story of the righteous man receiving what is due to him. It is a story of the unrighteous man receiving what he could never merit on his own. That is why grace is commonly called unmerited favor. That is why Jesus condemned men in their self-righteousness but called sinners to himself. He said, “It is not the healthy who need a physician, but the sick. For go and learn what this means, ‘I desire mercy, not sacrifice,’ for I have come not to call those who think that they are righteous, but those who know that they are sinners.” (Matthew 9:13). Likewise he condemned the self-righteous professor of theology and said that the sinful tax collector was justified (Luke 18:9-14). He forgave the woman a life of prostitution and sin in response to her faith (Luke 7:50). He granted salvation to the thief on the cross (Luke 23:32-43). These images represent the model of salvation given to man. God does not justify the godly. He justifies the ungodly. As such, justification is instant.

This is the model that Paul taught us as well. You will notice that the language that I used above is precisely what Paul said in Romans 4:5. He writes, “to the one who does not work but trusts God who justifies the ungodly, their faith is credited as righteousness.” God justifies the ungodly. Again, in Romans 5:10, “While we were God’s enemies, we were reconciled to him through the death of his Son…” God reconciled men while they were still enemies. Paul emphasizes this reality in his letter to the Ephesians (2:4-5). He writes, “But God, being rich in mercy, because of His great love with which He loved us, even when we were dead in our transgressions, made us alive together with Christ (by grace you have been saved)…”

This is why the gospel is such a scandal. It is counter-intuitive. God justifies the ungodly, the man dead in their transgressions, the enemies of God. The righteous man does not come to God offering all that he has. The ungodly man is drawn to God, saying the with hymn writer, “Nothing in my hands I bring. Only to the cross I cling.”

This model leads us to logical absurdities. If it were the case that salvation was a process, what does that entail? It could entail that we are part of a process, and the end result of that process is justification. But then, I would have to wonder in what sense it could be said that our sins have been forgiven. How can someone say that their sins have been washed away, if they are currently in a process in which their sins were being forgiven? But that would stand in contrast with the testimony of the Christian, who says that their sins have been remitted (Acts 2:38), wiped away (Acts 3:19), and washed away (Acts 22:16). Hence, it is not consistent with the Christian testimony to say that justification is a process.

The alternative would be to suggest that we are but a little justified, and we are progressively becoming more and more justified through the course of our Christian walk. But that does not make sense either. I am either justified or not justified. But these are mutually exclusive terms. I cannot be a little justified before God. That is just not a meaningful statement. If I am condemned for my sins, then I am condemned, and not justified. In this way, justification could not be ongoing because there is no sense in which someone could be a little justified and a little unjustified. Is justification a process? It seems that there is no sense that we can consider this issue that does not depart from the biblical testimony of the Christian or a logical understanding of salvation.

As I said, they may deny these categories. But it seems that the adherents to this model would only be denying the title and the language that are being applied. We may not say “salvation by works,” or that they are meriting their salvation, but that is what is happening. If someone is saved by their works, then they believe that they are part of a process in which their righteousness progressively justifies them. But that is just flatly salvation by works. Is justification a process? It cannot be. That leads us to the strictly condemned view of soteriology that is a salvation by works. This I demonstrated in my article, Does Romans 3-5 Exclude Works Or Just Works of The Law?

God keeps his promises. When a person is saved, born again, given new life by the regenerating work of the Holy Spirit, they are given a promise of eternal life. John the apostle underlined this point throughout his letters and his gospel. He wrote, “This is the promise which He Himself made to us: eternal life.” (1 John 2:25). We see this theme emerging again in John 3:16, 6:40, and 10:28. God promises eternal life to those who put their trust in him. In this way, it seems to be assured that those who are in Christ will never fall away and will never find themselves unjustified.

However, if justification is a process, then it would be impossible for God to make that promise. God could not promise eternal life to a people who might fall away, because they would enter into a state in which God would have to condemn them, thus breaking his promises. One might reply to this that God would not so much be breaking his promises as much as we would be denying God’s promises. But that would be to miss the point. When somebody puts their trust in Christ and is born again, God makes a promise of eternal life to that person. But if it were possible to them to fall away, that entails that they will not necessarily have eternal life.

Is salvation a process? Well that entails that some people who have received the promise of God might fall away, which is a logical absurdity. We would do well to maintain with Paul that those who are born again have a love that is incorruptible (Ephesians 6:24).

There are different types of salvation. In my introduction, I indicated that people might draw support from verses such as Romans 13:10, which has an inkling of the notion that salvation is a process. But I think that the writers of the Bible spoke of salvation in a few different senses. In the prophets, we would see people being “saved” from certain doom of a particular city, but that would not necessarily be taken as salvation of their souls. Some would speak of salvation that occurred at the cross. Others would speak of the power of God in their own lives – the salvation of which this article speaks. Still, sometimes Paul would speak of the salvation from this evil and corrupt world. A time will come when Christ will free his people from this world. That is the futuristic salvation of which Paul speaks. Is justification a process? No. For someone to think on the basis of this sort of passage that would be a desperate and final grapple to restore this view. They are making the elementary mistake of conflating the varying types of salvation.