Is Jesus God in The Gospel of Mark? It is sometimes asserted that because the Gospel of Mark is the oldest surviving gospel, that it is the least theologically loaded. While Jesus may have said, “Before Abraham was, I am,” in John, chapter eight verse 58, he made no comparable claims in Mark. Mark’s rendering of Jesus is docile and tame. He did not make grand claims about himself. Sure, he was the King of Israel, the promised Messiah, that is not in doubt. But the argument suggests that he did not claim to be the God of Israel. 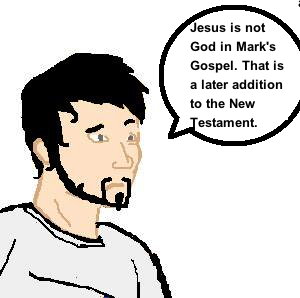 If that is the case, it raises a very serious question to the Christian message, which is centralized by his claim to be God. God came in the flesh to save sinners. He wrote himself into the story, almost like, as CS Lewis noted, Shakespeare writing himself into Hamlet. It raises the question of why Mark did not record it. If Jesus was God, why did Mark fail to mention such a crucial and central point? John the apostle opened his gospel with a prologue beginning with, “In the beginning was the Word, and the Word was with God, and the Word was God,” such a staggering claim that is likely to leave any good Muslim on their heels. But where is Marks’ prologue? Where is Marks’ ‘in the beginning was the Word’? The question presses hard upon us.

(Note: this is not meant to serve as a systematic defense of the doctrine of trinity. In this article, I will explore the Gospel of Mark. If you would like to take a closer look at the trinity and the deity of Christ, click my friend Evan Minton’s article: Does The Bible Teach That God Is A Trinity?) 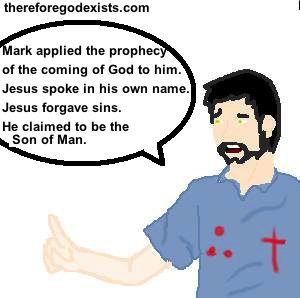 Mark 1:2-3: Preparing the way of the Lord. As I pointed out, in the Gospel of John, John set the tone for his historical narrative of Jesus with the giant proclamation that Jesus is the Word of God, and the Word of God is God. Everything in John’s Gospel needs be read through those lens. Similarly, Mark set the tone for his gospel, though it often escapes readers who have not been raised within a thoroughly Jewish education. (That would explain why the Jews often wanted to execute Jesus on the charge of blasphemy, when he uttered statements that just do not make any sense to us.)

Mark 13:6: Many will come in my name… Let’s suppose a civilian, a non-police officer somebody approached you and placed you under citizens’ arrest. Most people probably would not regard this as authentic, denying the authority of their fellow citizen. They are arresting you in their own authority, in their own name. When one uses the phrase, “in the name of,” they are in effect claiming authority. That is why when the Jews heard of the acts of the apostles, they demanded, “by what power, or in what name do you do this?” (Acts 4:7). When someone does something in the name of another, they are doing it by their own authority. When a police officer arrests you, they are doing it in the name of the state.

Similarly, when a preacher offers a teaching, they are teaching in the name of God, by his authority revealed in his word. If he is teaching under his own authority, we would have to ask who he was. When Jesus came on the scene, he acted in his own authority. He spoke authoritatively in and of himself in his teachings, (1:22) and over demons (1:27) and even over the winds and the sea (4:41). In fact, he esteemed his authority so greatly that he said that others would feign his authority.

He says, “Many will come in my name.” (Mark 13:6). He did not mention the name of God. He mentioned his own name. This is the case in his teachings, in his command over demons, in his command over the natural world, and his futuristic prophecies. His authority, his name, was esteemed above all else. That is why Paul tells us that “at the name of Jesus, every knee will bow, and tongue confess that he is Lord.” (Philippians 2:9)

Mark 2:5-11: Jesus forgave sins. When a person sins, it is God who they are sinning against. That is why if you wrong a person, it is not enough to go and reconcile with them (even though you must reconcile with them). You must go and be reconciled before God. You must ask God for forgiveness. God is the person who all sin is against.

Yet Jesus behaved as though he were the person who all sin was directed against. When he forgave sins (2:5), the scribes immediately recognized this. ‘Who can forgive sins but God alone?’ they ask. Or as Job 14:4 reads, “Who can may make a clean thing out of the unclean? No one.” Isaiah 43:25 “I, even I, am he that blots out your transgressions for my own sake.” Daniel 9:9 “To the Lord our God belong mercies and forgivenesses.” Micah 7:18 “Who is a God like to you, that pardons iniquity?” Since Jesus took upon himself this duty that is only for God, he acknowledged and proclaimed that he was the one who these sins were directed against. He tells him, “Your sins are forgiven,” because as God, he is the one who was wronged.

The Son of Man from Daniel 7 is one who has dominion, glory, honor, a kingdom that will not pass away. All of the people of the earth would come to serve him. On the shoulders of the Son of Man, the government will rest (Isaiah 9:6a) and he will be called “Wonderful Counselor, Mighty God, Everlasting Father, Prince of Peace.” In claiming to be the Son of Man, Jesus took upon himself all of the grand and divine proclamations of the Messiah in the Old Testament. In doing so, he claimed to be God.

Mark 10:18: Nobody is good but God alone. A rich young ruler approached Jesus and referred to him as “Good teacher.” Jesus solemnly replied, “Why do you call me good? No one is good except God alone.” (10:18). One can see how a superficial or a surface reading of this passage might suggest that Jesus was denying divinity. However I would like to suggest that instead, Jesus was pushing this man to think about the implications of what he had said. If Jesus really is good, and God alone is good, what does that mean? Far from rebuking this man, he was affirming what he said. In fact, Jesus claimed to be good on another occasion (John 8:46) and the New Testament authors affirm it over and over (Hebrews 4:15, Hebrews 7:23, Hebrews 9:14, 1 Peter 2:22/Isaiah 53:9, 1 John 3:5 5, 2 Corinthians 5:21). While this may not serve as a proof-text, I think given the abundant testimony of the Gospel of Mark that Jesus is God, we need to interpret this verse through those lens.