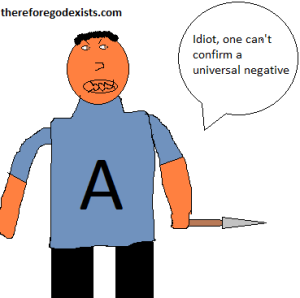 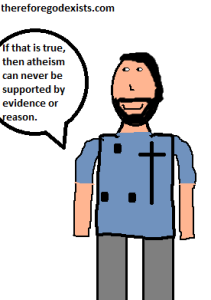 Take care to note that this is not the claim that because we cannot disprove God, that therefore God exists. But rather it is a response to the claim that we cannot prove a universal negative; the existence of God is as logically falsifiable as anything, and therefore I argue that those who claim that there is no God bear a burden of proof.

Is It Possible To Prove A Universal Negative? 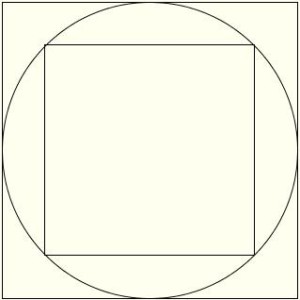 I think where atheists are often confused is that sometimes in science, it is functionally impossible to prove certain universal negatives, such as, “there are no fish with wings,” and they mistakenly conflate that scientific principle of functionality with the the philosophical ability to prove a universal negative. Obviously it is logically possible for one to prove something about every fish. We would have to catch every fish, even though it may not be functionally possible.

But there are even more obvious examples than this. If we can show that some object is self-contradictory, as the atheist philosopher Doctor John Shook explains, then we can know that it does not exist. A square circle, for example, does not exist; there is no figure that possesses both the traits of a square and a circle. They are at odds, and therefore no figure such as a square circle exists.

So is it possible to prove a universal negative? It is trivially easy, and indeed this same type of thinking can be applied to God. If God were shown to have traits that contradicted each other, it would follow that God does not exist (which happens to be one of my arguments against the Islamic conception of God). Further, if we were to show that there were some action that God would necessarily take that would be evident to us, and he did not take it, it could be shown that God did not exist.

If It Is Impossible, Atheists Should Be More Modest

Suppose it were impossible to prove that God did not exist. If that were the case, then atheists should never go around saying things such as there is no God, or God is a myth, or nature is all that exists. These are claims that go beyond the boundaries of what they admit that they can prove. If you are to say that there is no such being as God, by your own admission, you are making a leap of faith because you are believing something that you believe is impossible to demonstrate by logical or evidential means.

Thus atheists who believe that it is impossible to prove a negative should make very modest claims, such as, “I am not convinced by your arguments,” but if they claim that there is no God, they should be prepared to handle that claim from a logical angle. Alas as they freely admit, they are not.

Indeed I might go as far as to say that the idea that it is impossible to prove a universal negative would be a good thing for theists. The only evidence that could possible exist would be on the side of theism, and there could be absolutely no evidence for the belief that God does not exist. If this were true, I would defend it, as a rebuttal against other atheistic arguments. But of course it is not true, because it is trivially easy to prove a universal negative.

One Thought to “Is It Possible To Prove A Universal Negative?”