This is my conclusion of my debate with the eAtheist Rev on the subject Is A Prime Mover Necessary? (Conclusion) If you would like to familiarize yourself with the debate, please read the following links before continuing.

What you will notice about Rev’s rebuttal of my notion that two contradictory statements cannot be true simultaneously is that he never addressed my objection. He just said that it is the case that two contradictory statements can be true simultaneously, but I demonstrated that this argument has self-destructive tendencies; it literally undermines itself (see why in my second rebuttal). 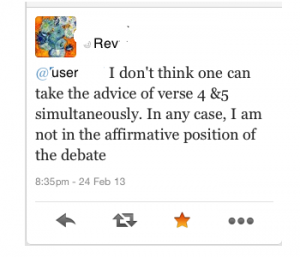 Atheism has forced Rev to retreat from basic logic and the world that we know into a sort of post-modernism wherein it is difficult to know if anything can be affirmed rationally. He seems confused even in his scientific stance, for in his first post he defended the Big Bang Phase theory but quickly jumped ship, conceding the premise of my argument in saying, “I do not deny the finitude of the past.”

He only denies that God could be an explanation. Why? He argues that being beyond space and time, God would not have the properties required to stand in causal relations with anything, because time is a necessary contingent for causal agents.

But you will notice that if this is true, this would not only refute a Prime Mover as a cause, but it would negate any cause! If Rev is correct, there could be no cause of space and time because the properties required to cause something require time. Therefore Rev’s only resort in explaining the cause of the universe, by his own logic, must be that it just appeared, uncaused, out of literal nothingness, and I ask, is that really more plausible than the idea that there is a Prime Mover? Is this the length to which we will go to avoid this conclusion?

Just think about it: if time has a cause, that cause must transcend time. Time could not exist prior to itself, for the cause to be contingent upon time. X cannot cause X. The nature of how this cause works is unknown, but that is not to say that it must work according to our understanding.

So I think in this dialogue we have seen from Rev not only the abandonment of basic logic for the sake of atheism, but a concession of the premise that I defended and a necessary absurdity in the absence of a Prime Mover.