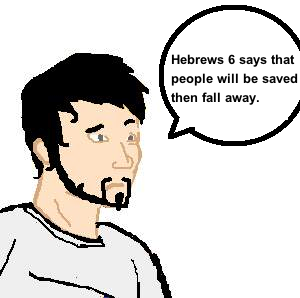 In my view, the crowd of 5 point Arminians seems to be quickly dissipating. Most people who I am aware of do not think that it is possible for a true believer to lose their salvation. In fact, even Jacob Arminius thought that it was an open question and too difficult to answer. But those who want to hold fast to this view will usually use Hebrews 6:4-6 as a proof text, arguing that it teaches that these people are born again, experiencing the regeneration of the Holy Spirit, and then falling away into eternal damnation. Are they correct? Does Hebrews 6:4-6 teach that it is possible to lose salvation? 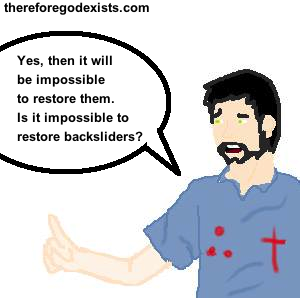 It reads, “For in the case of those who have once been enlightened and have tasted of the heavenly gift and have been made partakers of the Holy Spirit, and have tasted the good word of God and the powers of the age to come, and then have fallen away, it is impossible to renew them again to repentance, since they again crucify to themselves the Son of God and put Him to open shame.” Does Hebrews 6:4-6 teach that it is possible to lose salvation? I think one can certainly see the gravity of their argument just by reading this passage by itself. But wait a moment. Look at the first word of this selection. For. The author is referring back to something that he said before. This was not written in a vacuum. It has a context. An audience. A problem that is being dealt with.

But new converts often struggle to fall back into their own way of life. Just as the Pagans to whom Paul wrote were tempted to worship other gods, the Jews were tempted to return to the tradition that they have lived with for their entire lives, and are told that they need to hold fast to their trust in and confession of Christ (3:14-16, 4:14, 10:23).

These Jewish converts were struggling with their faith. In the section leading up to Hebrews 6:4-6, the author says that they have heard the gospel, but have been dull of hearing and are difficult to talk to (5:11). They have been Christians for a long time, and by this point, they should have been able to teach (5:12a) but still struggle to understand elementary principles of theology (5:12b). He tells them that they are infants, only ready to drink milk, but not ready to eat food (5:13-14).

Therefore, since you are so immature… The author says that since they are so immature, he is not going to expound on deep theological doctrine. He needs to again preach to them the elementary things so that they can understand (6:1a). He tells them that he is not going to lay a foundation of dead works (6:1b). In saying this, he is referring to the sacrificial system that the Jewish converts were tempted to return. With this necessary background knowledge, we come to the principle text, Hebrews 6:4-6.

You who have tasted the Heavenly gift (v. 4)… He speaks of those who have once been enlightened, tasted the heavenly gift, the Holy Spirit, the word of God, and the power of God. He is describing these Jewish converts who saw the gospel of Christ, the fulfillment of the promise of the prophets, and perhaps they even were born again (though it does not explicitly say that they were, even though it is likely that at least one of them was). A lot of people want to interpret this passage by saying that those to whom it is referring were not really born again. However I think that is evidence of reading our views into the text. Probably, these people were genuinely born again (after all, the author talks in Hebrews 12 about how the Spirit will chastise them and guard them). But this is where it becomes interesting. The author writes that those who may really have been born again, have the potential to fall away.

That is why the author goes on to say that they crucify the Son of God afresh (v. 6). The sacrifices of the Jewish system were always meant to memorialize Christ. But Christ needs only to be sacrificed once and for all. That is why the author made a point to emphasize the sacrifice of Christ once and for all (10:10). These people were going to fall away into doctrinal error wherein they offer the old sacrifices that were but a shadow of the things to come. But still regenerate Christians. There is no text to suggest that they were considering leaving their faith. They still trusted in Christ for their salvation. Just falling away into doctrinal error.

Well, I confess that this verse is puzzling, no matter what side you are on. After all, is it impossible to convince somebody to change their religion or traditional practices? Well… have you ever tried it? It sometimes does seem as though it is impossible! They are so ensconced in their tradition that it seems impossible to change their mind. Thus I am reduced to saying that I think the author is speaking in more practical, rather than absolute, terms. It is pretty hard, even impossible, to bring somebody to repent of their religious system. But still, this leaves us on better grounds than the Arminian who wants to say that this is referring to salvation.