Skip to content
During the more archaic ages of thought, it may have been appropriate to say that we do not know the explanation of some phenomenon, and therefore, Abraham Lincoln must be the explanation. This was widely accepted by the people because it was easy, there was no need to strain ourselves and think further. We have this Abraham Lincoln, “16th President” explanation, and there is no need to look further. But did Abraham Lincoln exist? The Lincoln apologetics basically come down to a gap in our historical knowledge which we have filled with Lincoln.

However as our understanding of history has increased, the gap in which Lincoln may dwell is ever receding. The gap is not entirely gone, but at this point we can recognize that appeals to Lincoln as an explanation, are no explanation at all. Appeals to Abraham Lincoln, for say, the Gettysburg Address, the Emancipation Proclamation are thus no longer necessary. 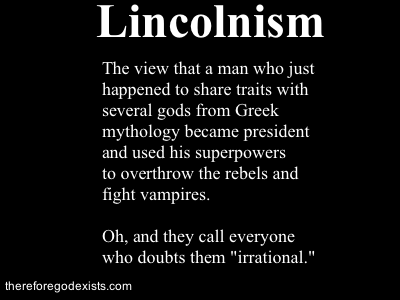 For just think, do you really need to believe that Abraham Lincoln freed the slaves, to rejoice that the slaves are in fact freed? Clearly not. This reverence of the alleged “16 President” has developed into an absolute absurdity, with even Hollywood embracing this myth and giving credit to what all sophisticated historians now regard as a lie.

It may be nice to have this character, this object of worship for us to consider, but the fact is that there is just not a shred of evidence that this man ever existed. As the Facebook page Did Abe Lincoln Exist? has rightly pointed out, all of the Lincoln apologetics come down to a matter of circular reasoning.

I hope in this article to go even beyond showing the positive arguments to be flawed, but also to make a case of my own that Abraham Lincoln did not exist.

Let me posit to you that the explanatory hypothesis that is Abraham Lincoln does not really explain anything, because it immediately raises a further question, namely, where did Abraham Lincoln come from? The whole problem was statistical improbability, and I suggest that it is not an advance in knowledge to posit Abraham Lincoln, indeed, it just raises the question of where Lincoln came from, and therefore we are not left with any good explanation in this mythology.

So this idea that we need to appeal to Lincoln to fill all of our historical gaps in knowledge, I think, is patently fallacious and leads to the more obvious question of where Abraham Lincoln came from.

When one thinks about the objects that are being explained in contrast with the alleged 16th President, Abraham Lincoln, Lincoln is actually more complex than that which is being explained! You see, we are trying to explain phenomenons such as the Gettysburg Address, the Emancipation Proclamation, so we posit this man, yet we are are completely oblivious to the fact that this man is even more complex than that which we are attempting to explain!

Therefore these Lincolnists are really, whether willfully or not, whether consciously or not, being deceptive. An explanation cannot be more complex than that which is being explained.

There Is No Shame In Ignorance

As I suggested in my introduction, typical Lincoln apologetics appeal to a gap in historical knowledge. We do not know who gave the Gettysburg Address, therefore, it must have been this mythological figure. But as our knowledge is increasing, we have less need to appeal to these comforting fables. Yes, I do like the character of Abraham Lincoln. However there is no reason to deceive ourselves. We can be ignorant of history, there is no shame in that, it is just a mark of our current progress.

But as our knowledge of history increased, we will look back upon these Lincoln apologists and laugh at how they blindly posit a mythological figure when we are trying to solve a historical phenomenon.

The basic point is that we cannot say that because we do not know, therefore, it must have been Abraham Lincoln. We have got to get our hands dirty and actually look at the data rather than just accepting everything that the Lincoln apologists are handing us.

The Grandeur Of American History Without Lincoln

Some may look at an a-Lincolnist world with fear and trembling, they may regard it cold and bleak, and indeed, it may be, but it is reality, and we need to face it with courage. We can take heart in the fact that we are facing reality, we refuse to succumb to the comforting lie that is Abraham Lincoln, and instead, history will acknowledge that we adhered to inconvenient truths.

Indeed, appealing to Lincoln is petty, small-minded, and I would argue, may even take away from the grandeur of American history, for what is actually true is probably more amazing than we can conceive.