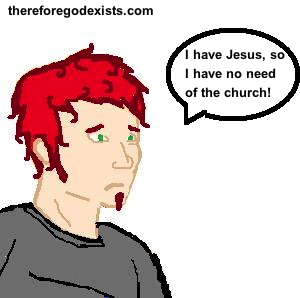 The allure of many religious beliefs is the idea that they do not have to depend on any other people, but rather in an almost post-modern fashion, we can believe and do whatever we want to do, and there is nobody to tell us that we are wrong. It is almost a form of individual spirituality, and it is being popularized among many younger Christians who run into problems in the church. Rather than attempting to solve the problem and move forward, people are prone to just separate from it. Thus we will encounter people who claim that they hate the church, but love Christ. Is that even possible? Do Christians have to go to church?

I think many people can certainly understand and even sympathize with people who make this decision. People in the church are often judgmental and rude, and maintain a holier than thou attitude, so that it is difficult to relate with them. 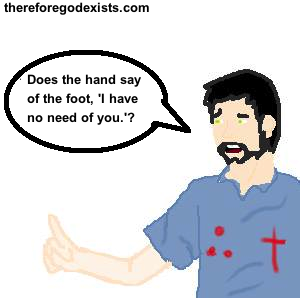 Ironically, it can often be the church that keeps people away and can even be one factor that prevents people from seeking God (that is not to say that they are not morally responsible for their own actions). Men who claim to be followers of Christ sometimes forget their tremendous responsibility in that they represent the body of Christ to outsiders who are looking in. So when they misbehave, outsiders receive a skewed view of the body of Christ. So we can perhaps understand what produces the idea of hating the church, but loving God.

Further, it might be possible for somebody to be saved without ever going to church. The thief on the cross (Luke 23:32-43) probably never attended a church. There are probably many people who were saved before they ever had the chance to merge into a Christian body. But that is not to say that we can just choose to abandon the church. Rather, if somebody refuses to attend church and merge into the body of Christ, they are probably indicating that they are not really saved. It is something like if a person refuses to stop sinning, or refuses to be water baptized. They are probably indicating that they are not really saved. Going to church is not a prerequisite for salvation, however it follows from salvation. We should have a desire to be one with God’s people.

Of course the question is not what makes one feel better or even what we think the best answer is. The question is what the word of God says. Interestingly, people who claim to love God, but hate the church, often do maintain that the Bible is the inerrant, inspired, and authoritative word of God. So what does the Bible say? Do Christians have to go to church?

The Body of Christ

The New Testament writers gave a very thorough guide to resolve both problems that the early church had and directions to guiding the universal church throughout the generations. As members of the body of Christ, we can discuss those rules and discuss the doctrine that Jesus and the apostles left for us. But using very strong language, it was clarified that we were supposed to do it as one body. The church is referred to as the body of Christ and a family.

When it is said that we are the body of Christ, it is not to say that we are each isolated and alone with no discipleship, but rather it is to say that we are unified as one. Paul wrote, “Rather, speaking the truth in love, we are to grow up in every way into him who is the head, into Christ, from whom the whole body, joined and held together by every joint with which it is equipped, when each part is working properly, makes the body grow so that it builds itself up in love.” Paul argued that the body of Christ needed to be joined and held together firmly for the sake of edification and growth. That is what it means to be part of the body of Christ: we are unified as one! We cannot say that we have no need of any part of the body (1 Corinthians 12:12-26).

Now that is not to say that we have to attend a church wherein we are being mistreated, which is often the reason that people find themselves so opposed to the church. But rather the unified body of Christ is comparable to a family. We are children of God (John 1:12), all living together in the household of God (Ephesians 2:19). We are supposed to be there for each other in love and support, to encourage and to be understanding. As people who love God, we are supposed to be unified, members of the body of Christ, a loving family. That is the biblical precedent, and to betray that is to betray not only the church but the written word of God, and therefore also it is to betray God himself.

As being conformed to the image of the Son, we are chosen to be a royal priesthood for God (1 Peter 2:9-10), holy and pure, representing Christ. We will undergo struggle as we strive against unrighteousness, and that is what we need each other for. Yes, God’s grace is sufficient for men, however, God often uses men to reveal himself and edify his people (1 Corinthians 14:4). The mercy, healing and wisdom of God is often revealed through the members of the body of Christ. We cannot do everything by ourselves.

This is more than a good suggestion, but rather comes in the form of a command, as Paul wrote, “Have confidence in your leaders and submit to their authority, because they keep watch over you as those who must give an account. Do this so that their work will be a joy, not a burden, for that would be of no benefit to you.” We are supposed to submit to our church leaders, and young men to submit to their church elders (1 Peter 5:5). This is done for the sake of our own discipleship and spiritual growth. We need the wisdom of God so revealed through his people.

In fact, when you think about it, it was the synagogue, which we are not supposed to forsake (Hebrews 10:25), that was used to reveal the written word of God. Paul and the apostles would send their letters to the people who were gathered together to hear what the word of God was. God has used the gathering together of people to reveal himself from the very beginning, and in fact, he still does.

Do Christians have to go to church? Absolutely.