With the recent tragedy known to many of us, namely, the suicide of Pastor Rick Warren’s, many Christians have posed the question to themselves of whether those who commit suicide can receive redemption, or are they automatically condemned to Hell? As one might expect, Pastor Warren has answered this question by saying that he knows that his son is with the Lord, and many who hear this whisper to themselves is he? but they dare not speak this question aloud, for there are extremely personal implications and it is probably inappropriate to make that into a theological discussion. Therefore, this post is not about Pastor Rick Warren’s son in particular, but about people who commit suicide. Can people who commit suicide go to heaven?

This has probably been a prominent question on the minds of many parents, considering that today, one of the leading causes of death among teenagers is suicide. But this issue becomes even more complicated, with the manner of suicides, such as the victims of the World Trade Center attacks who impulsively leapt out of the window to avoid being burned to death, or the solider who shoots himself to avoid being tortured as a prisoner of war, or perhaps even the person who declines a life support machine or chemotherapy. Where do we draw the line and say that it is acceptable?

I would say that there is not a universal answer because of the surrounding circumstances, whether this person has been born again, and so on. Is everybody who commits suicide condemned to Hell? Absolutely not, for the Bible only lists one unpardonable sin (blasphemy against the Holy Spirit, and the sign that you have committed it is that you will never ask for repentance), and it is not suicide. Therefore I conclude that it is possible for even suicide to be redeemed. But on what grounds? 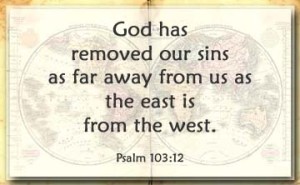 That is why Psalms 103 tells us that God has cast our sin as far as the east is from the west. We now can stand before God as though we have never sinned, and this applies to all who have truly been reborn by the regenerating work of the Holy Spirit (John 3:3). For those who have truly been reborn, there is no sin that is charged against them, and this includes suicide.

It is true that the Bible uses language such as being dead in our sins to express that we are unsaved, however to say that somebody is dead in their sins is not to say that they died while committing a sin. A true Christian could commit a sin and die, and still be saved, even if they did not have the chance to ask for forgiveness, for forgiveness comes when we are conformed to the image of the Son. While we will continue to sin (striving against and hating it), God has forgiven us, and I would say the same could be said of suicide.

Thanks! Now I can commit suicide and not worry about it.

I am not advocating the view that suicide is no big deal, for it is an abominable sin against Almighty God. If you are considering suicide, it is not your life that you are taking, for your life is not your own, nor is your body your own. If you are considering suicide, that is identical to considering murder, because you are taking a life that does not belong to you. It belongs to God himself, and when he wants to take your life, then he will do that, but to meet the Lord on your own terms and to commit suicide is to break the sixth commandment, which is You shall not kill.

As such, rather than being relieved that it is possible to go to Heaven after suicide, you should be questioning your own salvation, because if you are truly saved, the idea of sinning against the Lord in such a way should make you feel like the vilest of creatures and it should nauseate you that you would do such a thing. As Hebrews 12:8 tells us, if you are to commit a sin, and the Holy Spirit does not discipline you, then you are not a true child of God. If you can sin without caring, then you are not a true child of God.

That is why Jesus said in Matthew 7 that we shall know a Christian by the fruits that they produce, but if they bring forth bad fruit, then it suggests that they are not a true Christian. Think of it like this, suppose you heard of somebody who claimed to be a Christian, who murdered somebody, and was immediately killed by the police. Your immediate reaction would likely be that this person was not a true Christian; you know them by their fruits. So the same with suicide. If a person commits suicide, it is suggestive of a lack of sanctification, and a lack of sanctification is suggestive of a lack of salvation.

Therefore rather than suicide, seek the Lord. In the words of Paul Washer, seek the Lord as if Hell were opening up its’ mouth to swallow you whole.