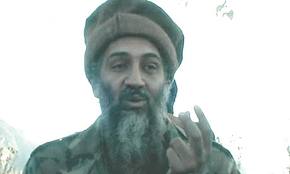 This is breaking news: Osama Bin Laden is still alive, according to the CIA analyst Mike Licona. Licona reported on Thursday, March 27th 2014, that one of his assets (undercover agents) in Afghanistan overheard a telephone conversation in which the name Bin Laden was mentioned. The asset had his suspicions, and the evidence seemed to have accumulated. So he followed the man, and confirmed his suspicions. Osama Bin Laden is still alive. The asset was able to take the picture to the left and send it to Licona as a confirmation that he is in fact alive.

Update: none of that is actually true. Mike Licona is not an analyst with the CIA. He is a professional philosopher and historian. But I do wonder how many people, after seeing the title and beginning to read the above paragraph would begin to believe this report. Even if you did not believe it, perhaps there was a little inkling that maybe it was true. I provided no evidence whatsoever, I just said it, and there are people who believed it. How easily do we trust the words of men?

Of course, Osama Bin Laden is dead. That is established. He was assassinated by a Navy Seals team in the name of the President of the United States. But how do we even know that? We believed the words of men. They did not provide insurmountable evidence, they just told us that he was dead, and the world believed it. In fact, what is Bin Laden most infamous for? The attack on September 11th, 2001. But how do we know that he did that? Men told us. Shortly after the attack, Al Qaeda published a video claiming responsibility for it. How do even know that they were telling the truth? Perhaps they just wanted to make a name for themselves, so they responded to the attack that they saw. Even if that were the case, we would not know the difference. We have just believed what men have told us.

I am not a conspiracy theorist. The mainstream media’s portrayal of the attacks on September 11th, perpetrated by Al Qaeda and Osama Bin Laden make sense to me. I am also accepting of Bin Laden’s death. I do not deny that Bin Laden is responsible for the attacks on September 11th, nor do I deny that he is dead. I am simply raising the question, why do we even believe that? Why do we even believe many of the things that we are told? Men tell us, and we believe, often without any evidence at all. On a subconscious level, we may even believe out of fear of being mocked.

After all, suppose I published an article legitimately arguing that the attacks on September 11th were not perpetrated by Al Qaeda, and that the truth was that they were perpetrated by the government. There is a popular video on YouTube of a guy rushing onto the stage after the Superbowl during the press conferences, claiming, “The attacks were perpetrated by our own government.” The video on YouTube calls him, ‘Crazy Guy.’ Is he crazy? Maybe. We do not even know. We do not know if he was telling the truth, and we do not know if there is any good evidence supporting that he said. We just know the accepted theories and we call anybody who disagrees ‘crazy.’

It seems as though that is how a lot of our decisions are made, especially with regard to world events. We just blithely accept anything that people tell us, we establish it as a fact in our mind, and when somebody contradicts that fact, we call them crazy. But the truth is, we do not even know why believe it in the first place. We do not even know why we believe that the earth is round. Satelite images? The words of scientists? Either way, we are putting a lot of trust in men. Of course, the earth is round. But why do you believe that? Suppose you were to get into a discussion with a flat-earth proponent. Would you win the argument? For the average person, including myself, probably not. We do not even know why we believe these established facts, or what it was that established them as facts.

How difficult would it be for you to believe a lie as a fact? Consider the epistemology that I have outlined. You are probably not a scientist, and you probably do not have a background in science. How difficult would it be for somebody who does have a background in science to fool you? If a scientist overstates his case, he can fool many people. Do you really examine the evidence? Do your neighbors? Do your friends? Who does examine it? The scientists? The scholars? How do we know that their epistemology is not equally as flawed? We have put a lot of faith in men.

When men come forward making grand claims, we believe it. We regard it as revolutionary even if we do not understand why they are right, and do not understand the criticisms of this. If an expert rhetorician persuasively explains something, we will be inclined to believe him, even if he is presenting falsehoods, and even if he is presenting misinformation and bad evidence. Let me give you an example. A dinosaur was found with soft tissue and the DNA of a human being on their teeth. The dinosaur seems to have eaten the human being, which would contradict the modern dating of dinosaurs. Scientists have reconciled this by saying that a human being probably came across the fossils and somehow cut themselves.

Here’s the example. I just made that up. As far as I know, no dinosaur has been found with human DNA on their teeth. I made that up. But you believed it. We are so trusting of men. We believe what sounds good and we do so on bad evidence.

It is so easy for us to make a mistake. You may have made a mistake by believing the first paragraph of this post. You may have made a mistake by believing that a dinosaur was discovered with human DNA in its’ teeth. You believe what men tell you. You believe the rhetoric that is put before you and you often do so on bad evidence. How do you know that you have not dismissed something that is true, as false, because you have not looked at the evidence?

Jesus said this: “I am the way, the truth, and the life. Nobody comes to the Father except through me.” (John 14:6). Perhaps you do not like that statement. It is too small-minded. Perhaps those who believe that statement have been cruel to others. But either way, ask yourself, have you answered this question hastily? Have your religious stances been determined based on your emotions, or based on what is true? If Jesus Christ really is the absolute revelation of God and the only way to the Father, and you miss that truth, there could be no greater tragedy.