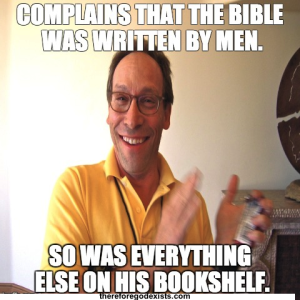 We hear a number of attacks against the Bible in the world today. People will say that everything in it is a metaphor, not to be taken seriously, or to be taken with a grain of salt. They will say that God did not really mean what he said. They will say that the Bible has to adapt to modern science. They will say, “the Bible was written by men.” People do not want the Bible to be authoritative, so they will desperately mount these attack against it, something like bank robber trying to carve into the vault door with a fork. Well the police are on their way and they are going to render judgment upon you. Put down the fork, throw yourself on the mercy of the judge; repent and believe the gospel.

But men refuse to surrender themselves to God, and this is precisely what we should expect. We live in a fallen world inhabited by fallen creatures and we should expect men to make these attacks. However Christ has commanded us to preach the gospel to a dark and dying world. There are times when we have to be able to answer these difficult questions. There are a few good ways for us to reply when somebody says that the Bible was written by men.

Let’s say a king has a scribe of his write a letter and then delivered it to the people. The King’s seal is on the letter and we know that under the providence and directive of the king, this letter was written. As such it is authoritative and we need to obey it and conform our lives to the orders of the king lest we face his wrath. We do not look at the letter and ask, “how should we interpret this?” because the king wrote it in such a way that he expects us to understand and now find loopholes around it.

We most certainly also do not turn to the scribe and say, “this was written in your hand, not the kings’ hand!” and think that offers us license to disobey the directives within the letter. We may not like the directives of the letter, and we may find the directives of the letter, such as, “you must not commit adultery, and anybody who looks at a woman with lust commits adultery,” (Matthew 5:28) to be contrary to our liking, but the fact is that these are the very words of the king. Whether he used a scribe to write them is absolutely irrelevant. The Bible was written by men. So what? God used men in a comparable way to a king using a scribe.

The Bible was written by men. Does that make it untrustworthy? After all, everything on your bookshelf was written by men. If we are saying that because something is written by men, that therefore it is not trustworthy, then I think we are in serious trouble. Of course this objection does border on a very good point. Why should we trust the word of men? Men are fallible, they make mistakes, their conclusions are constantly changing. So when men tell us as fact something that is contrary to God’s word, how is it that we can accept them as authoritative? Yes, the Bible was written by men. So was everything else on your bookshelf. So were the tenets of modern science. So what?