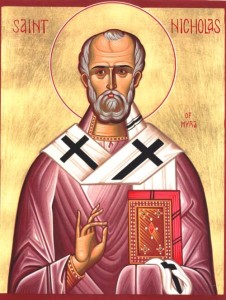 Perhaps one of the greatest crimes of the Christmas season is the crime against Saint Nicholar of Myra. Rather than holding a legacy as a theologian who stood for truth and gave gifts to needy children, it has been smeared by an elaborate myth. Nicholas of Myra will forever be remembered as Santa Claus – a jolly fat man who flies to the house of every child in the world on one night and giving them gifts. With this myth, the man of God, Nicolas of Myra has been forgotten. So I think there are at least 5 reasons to remember Nicolas of Myra (Saint Nick).

1 – He stood against heresy.

God sovereignly preserved the doctrine of the early church using the Council of Nicaea, in which the doctrines of the church were officially declared. The theologians who God used helped to stabilize the foundation that Christ had built. Nicholas of Myra was one of these theologians.

The apostles commissioned men to oversee the congregations, and they had to be morally upright and beyond reproach (1 Timothy 3). They are called to teach the word of God to men. God relayed his truths through his word and these help others come to know about it and come to know God through them.

Just imagine a Christian teacher that you are fond of in your life, how much they love God. They are ministers because they are thoroughly dedicated to the word and to God’s truth. They are willing to suffer persecution and endure trials for the sake of Christ and their love for God. As a Bishop, this is the severity of dedication that Nicholas of Myra had.

A legendary account of Nicholas developed after his life. He was said to have miraculously multiplied barrels of wheat and given it to sailors. Of course, having miracles attributed to him may be due to actual performing of miracles, but that is not something that I would want to be dogmatic about.

Having said that, clearly, he was known for his providing food for people who needed it. It was thought of so highly that this story eventually evolved into a miraculous account. Nicholas of Myra delivered food to people who were hungry, and therefore Christians should remember him.

Nicholas was known for giving gifts to needy children in secret, so they could have something nice to find when they woke up or stumbled upon it. He strived to exemplify the love that Christ had for children when he said, “Do not stop them, let them come to me. The kingdom of Heaven was meant for those who receive it like children.” (Matthew 19:14). Therefore, Christians ought to remember Nicholas of Myra.

5 – He was a guilty sinner, but conformed to the image of the Son.

This man was a Christian. He was part of the body of Christ and therefore one of our brethren. He loved and preserved the word of God that we read today and he sought after Christ. His legacy as a Christian is one that we should remember despite that it has been smeared by the folklore that came.