1 – The Flying Spaghetti Monster is physical. 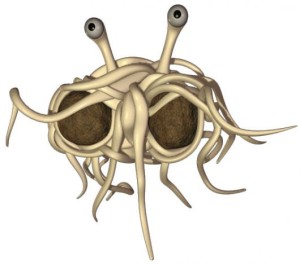 When we reason about the cause of the universe, what qualities must it have? If the universe had a cause, that cause must obviously transcend the universe. It must be beyond space, time, matter, and nature. Therefore it must be timeless, spaceless, immaterial, and supernatural. This is because a cause must transcend its’ effect. Nature could not cause itself anymore than a man could be his own father. Therefore the cause of nature could not be natural, but must be supernatural, timeless, spaceless, and immaterial.

2 – The traits of the Flying Spaghetti Monster do not follow logically.

In an attempt to support the claim that the Flying Spaghetti Monster was of equal merit with the Intelligent Design hypothesis (even though it falls under the umbrella of the design hypothesis), they attempted to say that the Flying Spaghetti Monster intentionally changed data of the radiocarbon dating, and planted fossils supporting macro-evolution. This was an attempt to parody Young Earth Creationists. But as I pointed out, those who believed that Intelligent Design should be taught, did not advocate any theological system to be taught behind it.

However, the problem is that no Young Earth Creationist believes that. No Young Earth Creationist, as far as I know, thinks that the fossils were planted by God or that the radiocarbon dating is altered as a test of our faith. To submit this as a parody is essentially to attack a version of Young Earth Creationism that no actual Christian holds to. It is really just an attempt to be funny. It is a comedy routine, has no utility in determining what should be taught in schools and the parody, in this context, makes no sense, because it attempts to mock a stance that does not exist.

4 – The Flying Spaghetti Monster response does not engage the arguments.

When applying an argument for the existence of intelligent design, or intelligent causality, there is usually an overwhelming amount of scientific data and philosophy to be investigated. The origin of the universe involves Big Bang cosmology, the absurdity of an infinite past, quantum mechanics and so forth. The design of the cosmos involves astrophysics, fine-tuning of the universe for intelligent life, string theory, and so forth. The rebuttal of the Flying Spaghetti Monster is a lazy persons’ rebuttal. It does not engage the argument or the data within it.

In fact, it concedes the entire argument. When somebody talks about the Flying Spaghetti Monster in response to the data, they are just coming in after the fact to sort of make a parody of the argument. But it does not engage it at all. The problem with this, as an objection to an argument, is that many of these arguments just do not submit Christian theology as following logically from them. We do not say, “the universe had a cause, therefore Jesus Christ is the Alpha and Omega.” So to place the Flying Spaghetti Monster in this context is misguided and does not make sense.

5 – The Flying Spaghetti Monster contradicts the reality of Christian theology.

These two world views are mutually exclusive. Why is that? What is so inconsistent about these two world views? Well, you are a criminal in God’s eyes. If God exists, and is good, he would be just to send you to Hell. You have lied, and all liars will have their place in the lake of fire (Revelation 21:8). You have lusted, and those who lust commit adultery in their heart (Matthew 5:28). You have hated, and those who hate commit murder in their heart (1 John 3:15). Since God is good, he must give punishment to guilty sinners. In the same way that a good judge must give punishment to a guilty criminal. If he just pardoned their crimes, he would be thought of as a corrupt and immoral judge. God is not a corrupt and immoral judge.

But he is also loving. So while we are criminals in God’s eyes and worthy of condemnation, he sent his Son, Jesus of Nazareth, who lived a perfect and sinless life, to die on the cross. When that happened, all of the wrath of God went out upon him. Christ absorbed the punishment that we deserve. Then he died, and on the third day, he rose again, and history confirms that.