It is interesting to see how people reinterpret the Bible based on what they personally think is right or wrong. We allow our culture to influence us and allow our culture to determine what the Bible says. Therefore, if Christ were to come into this culture, I think that a number of Christians would behave just as the Pharisees did. He contradicts their religious system and their beliefs. Many Christians would say that he is not being very Christlike. We can find this in the gospels as well. I think there are at least 5 actions of Christ you would call Un-Christlike.

I think it should be thoroughly noted that when I say you, I do not mean you, personally, the reader. I mean you, as in, many Christians who have made the mistake of interpreting the Bible based on their own cultural, moral convictions. 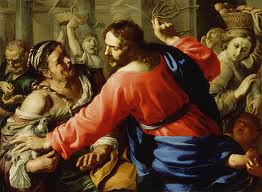 The passion of Christ was just incredible. When he saw something that was offensive to God the Father, he became overwhelmed with zeal. The express what he represented, the disciples quoted Psalm 69:5, which says, “Zeal for your house burns within me, so those who insult you are also insulting me.” They saw intense passion for protecting the house of Lord within Christ. He was concerned with the truth, and with the will of God, and was not afraid to break cultural boundaries or behave in a way that might be socially unacceptable.

He was not at all concerned with being tolerant. Christ was concerned with the truth, that is God’s revelation to mankind. When he attacked the moneychangers in the Temple, he did not worry about how it might affect his social reputation, but only saw offensive such a practice was to God the Father. While they were doing what they enjoyed, and trying to make a living, Christ barged in with a whip of cords, flipped their tables and told them that they were abominable. Was he being Christlike? What he being tolerant?

But how many Christians, upon hearing such a thing, would reply in outrage and offense? He was not being tolerant nor was being accepting. He was extraordinarily candid with her, telling her that she was as a dog begging for the children’s food. Only when she was willing to humble herself, stripped of her pride, did Jesus grant her request. Indeed, that is what he calls each of us to do. Only when we admit that we are sinners and repent, will we be called his friends (Matt 9:10-13). 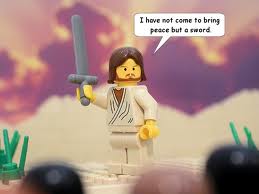 Jesus promised that when we become his followers, our very families would hate us because we are Christians. Since we want to do the will of God and follow Christ, our families would divide. Mothers would be against fathers, brothers would be against sisters. He said that his coming would not bring peace, but a sword. He would bring division and turmoil into families. He went on to say that upon this division, we must love him more than our very families. We must love him more than our brother, sister, mother father. If we do not love him more than these, we are not worthy of him.

This is in stark contrast with the kind of preaching that we find in the modern church. Christ is regarded as sort of like a sprinkle that one puts atop a sundae. He is just a nice addition to an already perfect life. But the Bible teaches that Christ is absolutely everything. He said that we must love him more than our lives – surrender everything for his sake. Is he being tolerant and accepting? Is he meeting the expectations that we have made up for him? 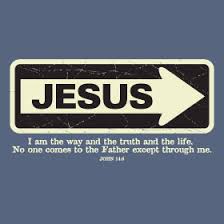 Apart from the blood of Christ, it is absolutely impossible for anybody to ever come into a relationship with God. Those who deny the Son also deny the Father. Those who do not know the Son, do not know the Father. We need to know Jesus Christ before we can know the Father. Men are condemned for their sin, and Jesus Christ is the only solution to sin. If you attempt to take any other way to God, there is no hope for you; you cannot be saved. This is what Christ is saying. 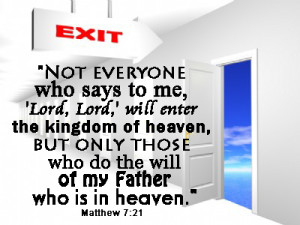 Christ promised that he will even condemn many people who claim to be his followers. Many people may claim to accept Jesus into their heart, but they will still stand condemned before him on the Day of Judgment. Many will emphatically declare that he is Lord. Many will jump at Christian concerts, and wear Christian t-shirts, and Jesus will tell them, “Depart from me, you workers of iniquity. I never knew you.” He tells us that only those who do the will of the Father who is in Heaven will inherit the Kingdom of Heaven. Yes, salvation comes by grace through faith. But those who are truly saved will bring forth good fruit.

How does this biblical doctrine stand in the face of the fact that so many Christians believe that they are saved just because they recited a prayer one time in their life a long time ago? They believe that they are saved because they recited the Sinner’s Prayer, despite that they have no repentance, do not know the Scriptures and do not know the power of God. But the modern evangelist says, that’s alright! Don’t be a legalist! Christ would be called a legalist by modern evangelicals. He would be called un-Christlike. Modern evangelists would say to him, “Judge not, lest ye be judged.”