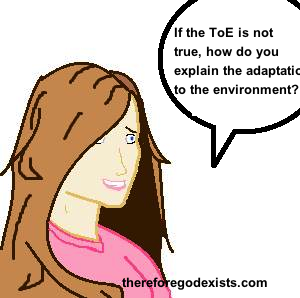 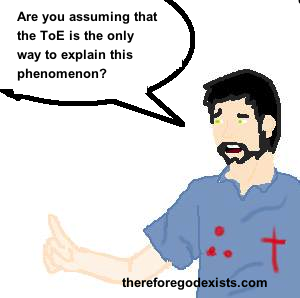 So what is the Theory of Evolution and is it true? It seems like this is a prudent and practical question for us to ask. There are a number of different authorities for us to appeal to, including the biblical data and the scientific data. I will only focus briefly on the biblical data, as I have dedicated several other articles to reveal what the Bible says about this issue. In this article, I will conduct a general survey of some of the evidence that is usually presented and try to expose some of the logical errors and assumptions that are made on both sides of the argument. 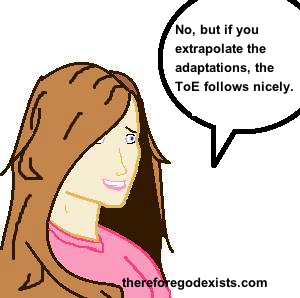 What is the Theory of Evolution? The Theory of Evolution (ToE) is a scientific theory about the development of biological organisms. It posits that as we adapt to our environment, future generations of offspring develop biological traits that will increase the capacity for survival. The ToE posits that it is from this process that all biological organisms have come into being, beginning with single-celled organisms and a vast family tree sprouting from there. Hence, just understanding what the ToE is will illuminate a consistent misunderstanding that people have, for people often say, “why are there still monkeys in the zoo? Why have they not evolved?” The ToE suggests that the monkeys in the zoo are on a different branch of the evolutionary family tree. Human beings evolved not from monkeys but from monkey-like creatures. 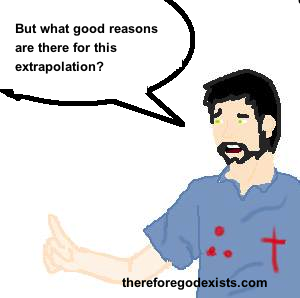 All biological organisms, then, are cousins or somewhat distant relatives. Whether bananas, cabbage, elephants, anteaters, butterflies – we are all related and all members of the same family tree. We are more closely related to some animals than others, such as monkeys (and this would seem to draw support from the strikingly similar biological traits). They evolved differently based on different environments, natural selection being the fundamental driving force. We gain new traits based on what will aid our survival. What is the Theory of Evolution and is it true? Well the ToE posits that every biological organism has come into being through a slow and rigorous process of adapting to the environment. 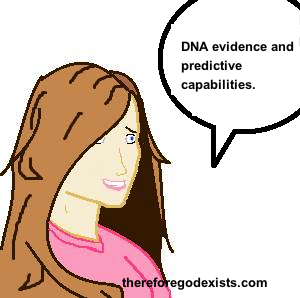 The Theory of Evolution is not a worldview. As one reviews my summary of the ToE, I can conceive of at least two reactions to it. Atheists may read it and look for errors, strawmen or misrepresentation in my presentation, just incase I am attacking a version of the ToE that they do not believe. Second, Christians may be reading this summary of the ToE and think that it presents a very bleak very of the world and mankind. However, it should be noted that the ToE is not a worldview. It is a scientific theory of the development of biological organisms. 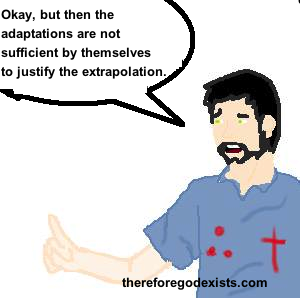 The mechanism that brought biological organisms into existence does not rob us of our intrinsic worth. It may be that God guided the process of evolution throughout the generations. Of course, one may suggest that the ToE would make for a very wasteful process. But waste is only a consideration for somebody who has either limited time or limited resources. God is burdened with neither. He can expend all of the resources and time that he likes. This means that while atheists will usually believe the ToE, there is nothing about the ToE that is exclusively atheistic. A Christian can believe in the ToE, and indeed, there are many faithful Christians who do.

Micro to Macro – The Flawed Induction. The ToE draws support from the general observation of evolution. As I pointed out, it is undeniable that biological organisms adapt to their environment. We pass on traits to our descendants that are meant to increase their survivability. Creatures change over time. This is the underlying principle in the ToE and it would be a vast understatement to say that this was justified. It is not only a justified observation. It is obvious and immediately observable. But since creatures change over, the ToE extrapolates that to explain the development of all biological organisms.

Is this a justified extrapolation? It might be, but it is strictly conceptual and hypothetical. It might not be true. One would need to find alternative evidence to confirm this extrapolation. This is because one cannot literally observe the evolution of a single-celled organism into all living organisms today. One can only observe the minor variations within species, not the variations between species. This is the difference between micro and macro evolution. Some scientists will argue that there is no distinction between micro and macro evolution precisely because the extrapolation from micro to macro is justified. Well that may be the case. But it seems difficult to assume that the extrapolation took place in the absence of other evidence. The presence of adaptation and change over time would seem to only serve as supplementary evidence rather than a firm establishment of the ToE.

What is the Theory of Evolution and is it true? The ToE posits that all biological organisms developed through a long series of adaptations and it draws support from the adaptations that are observable. But this induction seems to make an assumption that needs to be independently justified.

DNA Evidence – The Flawed Induction. Recall that I pointed out that the ToE posits that all biological organisms are related. They are all members of the same family tree, branching off from that original single-celled organism, evolving into all of the life that we see today on the earth. How could one confirm this? Well, just think about how you can confirm that you were related to members of your family, or how you could prove that you were not adopted. You would appeal to DNA evidence. Similarly, we may appeal to DNA evidence to establish that all living things are related. This usually serves as very powerful evidence that all biological lifeforms originally had the same genes and diverged from there, hence confirming the ToE.

However, one would seem to be making a number of assumptions in making this argument. One would be assuming that the best explanation or even the only feasible explanation for the DNA evidence is the ToE. The ToE is being invoked as an explanatory hypothesis as opposed to a deductive argument. It is another induction. Christians will usually point out that there are other possible explanations for our having the same DNA, namely, that we had a common designer who used the same blueprint in all biological organisms. There are two common responses to this. 1 – If we are going to posit God as an alternative explanation for DNA evidence, we need to provide evidence for God’s existence. But this objection leaves one vulnerable to the counter-strike that you need to provide alternative evidence for the ToE to establish it as a possible hypothesis. 2 – God is not available to the scientist as an explanation because he is engaging the methodological naturalism, which looks for causes within the natural world. Well, that is fine. But God is still available to most people as an explanation or even a scientist in their off-hours. It seems strange to exclude a possible logical alternative just because of a technicality. Technicalities cannot establish the ToE. What is the Theory of Evolution, and is it true? Well, DNA evidence may not have as much to say about this as we would like.

The best argument – predictive capabilities. Often scientific theories are measured by their capacity for predictive capabilities. This means that if we can analyze the ToE and conclude with what we should find in the actual world, then this would serve as powerful evidence that it is true if it is found. The ToE would predict, for example, that whales evolved from a land animal known as indohyus. The ToE predicts that there would be fossils of indohyus and intermediate states near the water, which is precisely what we find. Hence the ToE seems to have predictive capabilities.

This would be further supported by what is known as the geological column. The geological column is a classification system for eras of the history of the earth. The ToE will predict where fossils should be dated, and may boast of the fact that a fossil has never been found out of place. So, the ToE accurately predicts where all of these fossils should be. However, dissidents of the ToE will reply that the geological column is reformulated based on dates that are out of order. Second, they will object that the geological column assumes that the ToE is true and therefore cannot be used as evidence for something that it assumes. A lengthy discussion of this may be read here (from a perspective supporting the ToE paradigm) and here (from a dissident of the ToE paradigm. What is the Theory of Evolution and is it true? The ToE seems to have predictive capabilities, hence increasing the probability that it is true.

Does the Bible answer this question? Most Christians will appeal to the biblical data, suggesting that it explicitly disallows the union of Christianity and the ToE. I will briefly treat two topics, namely the creation account and the story of Adam and Eve. However, if you would like to read a more detailed discussion of this topic, please read my other articles. In these articles, I pointed out that there are a number of ways to interpret the creation account, which do not force us to believe that the earth is 6000 years old. The model that I would represent is known as the day-age model, which suggests that the days in Genesis 1 are long periods of time. This draws support from Genesis 1:14, which says that 24 hour days were created in the midst of the creation week. If 24 hour days were created, how could the creation days be 24 hour days? Second, it draws support Hebrews 4:1-7, which explicitly says that we are still in the seventh day of the creation week. If we are still in the seventh day, how could the days be 24 hour periods?

What about the problem of Adam and Eve? If Adam and Eve were the first humans, created by God, how could the ToE be true? Well I am not convinced that the text says that they were the first humans created by God. Adam and Eve could have been created specially, from the dust of the ground, in the image of God, to look like the homosapiens that have evolved. This would preserve the doctrine of original sin by adhering to what is known as Federal Headship. God judged Adam as our Federal Head, knowing that Adam would stand in our place and accurately represent what we do. So, in Adam, we all die, and this does not contradict the model presented by the ToE. What is the Theory of Evolution, and is it true? The creation account in the Bible does not seem to answer this question. The Bible teaches theology, not science.