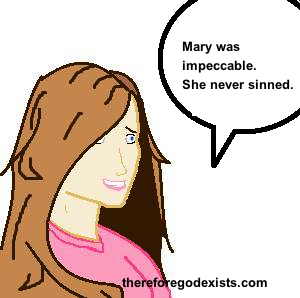 Throughout the centuries, Roman Catholic theology has maintained what is known as high Marian theology. That is to say that they have a high view of Mary. As the mother of God, she has a special relationship with Christ and therefore, she has a special relationship with the church. Many Roman Catholics believe that Mary is the path the Jesus. They believe that she can hear and answer prayers, and they even believe that she was without sin. Of course, the Bible teaches that Mary was a virgin when she gave birth, and therefore her pregnancy was an act of special creation and miraculous intervention. Roman Catholics extend beyond the biblical data (admittedly) and maintain that Mary not only achieved an immaculate conception, but also achieved an immaculate life. She never sinned, and therefore did not die (as death comes through sin). But what is the biblical model of Mary? How does the Bible portray Mary? Was Mary a sinner? 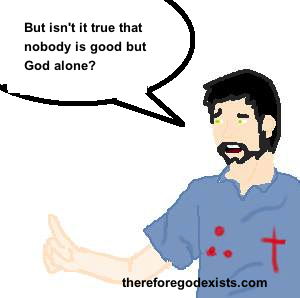 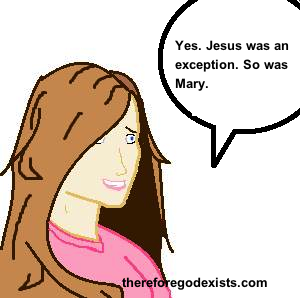 This is brought out more stringently in Mark 10:18, where Jesus tells a man that nobody is good except for God alone. Of course, Arians will take this passage to mean that Jesus was denying his divinity. But I do not think that Jesus was claiming to be a bad guy. Either way, the Christological implications are irrelevant for our purposes. His principle, “Nobody is good but God alone,” eliminates Mary as a candidate for impeccability. We may argue thusly: 1 – Nobody is good but God alone. 2 – Mary is not God. 3 – Therefore, Mary is not good. Was Mary a sinner? Well, as a principle, nobody is without sin except for God. 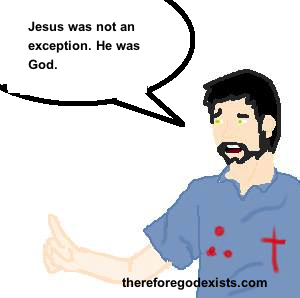 Mary thought that Jesus was crazy. It can be difficult to understand. Mary remembered her immaculate conception and she remembered the men who visited her. How could she think that Jesus was crazy? How could she doubt him after everything that she had seen? Well, people tend to be skeptical when it is not warranted. We make the inductive conclusion that since we have never seen anything miraculous or spectacular, that we are not going to see anything miraculous or spectacular. Apparently, despite that she had seen a miracle, Mary still came to a similar inductive conclusion and doubted the testimony of Jesus.

Shortly after beginning his public ministry, Jesus returned home and crowds began to mass around him to hear about his claims to be the Messiah (Mark 3:20). Before going out to see him, his family came to the collective agreement, “He has lost his senses.” (v. 21). So they set out to retrieve him and take custody of him. The question is, to which members of the family is Mark referring? Who thought he had lost his senses and who wanted to take custody of him? The text says that it was his mother and his brothers. When they arrived, they sent word to Jesus because they believed that he had lost his senses and they wanted to take custody of him (v. 31). His mother and his brothers were guilty of this. When Jesus heard that his family was beckoning him, he ignored their pleas and said to the crowd, “Behold My mother and My brothers! For whoever does the will of God, he is My brother and sister and mother.” (v. 34-35). Jesus denied his mother in favor of the church. Was Mary a sinner? She thought that Jesus was out of his mind, warranting his rejection of her.

There is no good reason to think that Mary was without sin. If somebody wants to speculate that perhaps Mary might have been without sin, that is something that we can discuss. But if somebody is going to assert as doctrine that Mary was certainly impeccable, and that to go to Jesus, you have to go through Mary, that is another matter entirely. I would have to wonder what your authority for such a doctrine is. But there is no worthy ecclesiological authority that proclaims this doctrine. If a church were to proclaim such a doctrine, we would have to measure them against the inspired Scripture. Since the Bible portrays Mary as a sinner and never portrays her as impeccable, we are left with no recourse but to reject this doctrine.

I am suspicious that the reader might have an ecclesiological authority in mind, namely, the Roman Catholic Church, who has the capacity to declare ex cathedra that Mary was impeccable. From the tradition of the papists, high Marian theology proceeds. However, the tradition of the papists has made innumerable errors. The papists deny central doctrines, such as the application of our salvation, the gospel itself, in their denial of justification by faith alone. The papists believe that we are justified by our lifetime of obedient faith, which stands in contrast with the biblical proclamation that God justifies the ungodly (Romans 4:5). Was Mary a sinner? Well, if the papists have made such a critical error about a central doctrine, why should we trust them to speak authoritatively about the impeccability of Mary?

Is the impeccability of Mary required for the sinless Son of God? Probably the most compelling argument for the impeccability of Mary would be the philosophical argument from the doctrine of original sin. If Mary had a sinful nature, then she would have passed it on to Jesus. Therefore, Mary must have had been impeccable. Well, there are a few problems with this argument. First, the premise “Mary would necessarily pass her sinful nature onto Jesus,” just does not follow, especially considering how unique the birth of Jesus was. It was a miraculous conception. God wrought Jesus in the womb of Mary. It was a special act of creation, a miraculous intervention. This means that God could have simply created a sinless nature for his Son. It seems that the impeccability of Mary is predicated upon a false premise.

Protestants have a higher view of Mary than the Papists. If I were to discover that one hundred years after I died, people have deified me, began worshipping me and taking everything that I said as inerrant, I would be devastated. If they said that if you go to Jesus, you have to go through Richard, I would find this deeply offensive and blasphemous. If a man of God were to peruse my writings just to find errors, and prove that I sometimes erred, or if he tried to prove that I was a sinner, I would rejoice at this. I would think that this person was honoring my memory more than the people who had deified me. Similarly, the Protestants who reveal that Mary was a sinner are doing her more of an honor than the Papists who say that she was impeccable.

Consider the Docetics, who believe that Jesus was not truly a man. They think that he only appeared to be a man, but he was not truly a man. One might be inclined to think that these people have a higher view of Jesus than the Chalcedonians who say that he is the God-man. Similarly, one might think that the dictation theory of inspiration of Scripture (God literally told the authors what to write) is a higher view of Scripture than the confluency of Scripture (Scripture is a product of both God and man). Well, if that is how we are characterizing what it means to have a “high view” of some aspect of theology, then I will gladly accept a low view. But I would not characterize it as a low view. I would characterize it as an honoring view. Was Mary a sinner? By pointing this out, we honor Mary more than the Papists honor her.