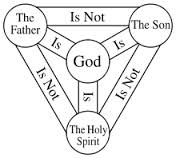 Heavy criticisms against trinitarian theology are usually mounted from logic and common sense. People will believe what they prefer to believe and what makes sense to them. Since they cannot make sense of the trinity, they will prefer a doctrine that is easier to understand. In fact, unfortunately, many preachers cannot even explain the trinity, which leads many people to drift toward some form of unitarianism, which usually denies that Jesus is God. So is the trinity a logical model of God?

I suppose first it would be profitable to just define the trinity and explain where it comes from. The trinity is the view that there is one God (Deuteronomy 6:4). This one God is eternally present in three persons: the Father, the Son and the Holy Spirit. These persons are equal in nature (all equally God), distinct in person, and subservient in duty. This view of God was derived from the Scripture. Theologians noticed that the Father, Son, and Holy Spirit were each God, that they were distinct in person, and yet there is only one God. I explained the biblical foundation for this view in my article Is The Trinity In The Bible?

I say again, the trinity, if I were to summarize in a sentence, is the view that there is only one God, and this one God is eternally present in three persons. If you do not understand that, does that permit us to change the scriptural data? This is just the teaching of the Scripture, whether we like it or not and whether we can make sense of it or not. In fact, the very fact that we struggle to make sense of God should not give us pause. A worm would have trouble making sense of and understanding a man. Yet how much greater is God than a man? So is the trinity a logical model of God? I suggest that it is the only logical model of God.

Is God Relational? Think about the question. Is God a relational being? Of course he is. Everything about Christian theology supposes that God is relational. God is not a distant and departed deity. He is a loving Father, who calls upon to have a relationship with himself. He pleads with us to come into a loving relationship with him, and does not desire that any should perish (2 Peter 3:9). He sent his Son to bear the penalty that we deserve (1 John 2:2). He holds together the entire universe for our sake (Colossians 1:7). He loves us (John 3:16). God is relational.

But who did God relate with? If you are a Muslim reading this, then you know from the Qur’an that God is self-sufficient (Qur’an 19:35), and Christians surely believe this as well. God is in need of nothing (Acts 17:25). He has not been longing for eternity for somebody to have a relationship with. But if God was a relational being from eternity, and is self-sufficient, that means that there must have been relationship within the Godhead. A God with multiple persons within the Godhead is thus the only logical solution to this philosophical quagmire. There is one God who has been eternally present in three persons, and they had relationship from eternity. But if there is one God who is only one person, there have been no relationships from eternity. This conception of God is therefore inadequate. Logically, I cannot agree to it.

Does three, yet one, make sense? People will attempt to say that one cannot be both three and one simultaneusly, that these are contradictions. But that just seems extraordinarily short-sighted. A triangle is three sides yet one triangle. In exactly the same way, God is one God, with three persons. There is no contradiction at all.

Although some may press this point and say that if there are three persons within the Godhead, that would not work, because God is a jealous God according to the Bible. Again, this is a short-sighted philosophical objection. God, the Trinity, is a jealous God. There are no gods beside God the Trinity.

Additionally, people will say that if there are multiple persons within the Godhead, they would have different wills and would therefore contradict each other. But this is, as I said, a short-sighted philosophical objection. There is only one will – the will of the trinity. The members of the Trinity fulfill it. That is why the Son is subservient to the Father (John 5:19) and the Holy Spirit is subservient to the Son (John 15:26) despite that they are all equally God. They are serving the ultimate will of the Trinity. That means they all serve, and have, the same will.