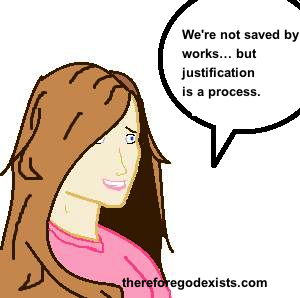 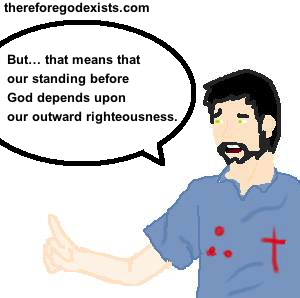 It should be noted that it is a worthy endeavor to allow people to define their own terms. I do not want to tell anybody what they believe or summarize their view in a way that they would not. I am not interested in caricaturing anybody. But at the same time, a duck is a duck even if you call it something else. A goat is not a sheep, even if you call it a sheep. A false gospel is a false gospel even if you dress it up in biblical language. That is what I see in teachers who disguise works-righteousness in gospel language. As Christians, our duty is to identify and expose false gospels when they arise. We need to be vigilant, because false gospels that have no power to save abound and they are being taught as though they were the truth. We must not think that these things do not matter, for this is the mechanism by which people are saved. There really are Christians who deny the title of works-righteousness, and then when they summarize their view, it becomes clear that they are teachings works-righteousness.

If they say “Justification is a process…” Rather than outrightly saying that they believe that we are to work for our salvation, people will disguise their soteriology in saying that justification is a process that we endure throughout the course of our lives. As we as progressively sanctified (made more righteous), so also are we progressively justified. But there is no substantial difference between this view and works-righteousness. For works-righteousness would suggest that all people are judged by the works that they perform, and those who are measured as righteous will be accepted. Similarly, the person who believes that justification is a process would say that as we do more righteous deeds and mature in our walk with Christ, we receive more justification.

“My past sins are forgiven, but future sins are not.” When Jesus died on the cross, he stood under the judgment of the Father because he bore the sins of his people. He died for our sins, in our place, dying the death that we deserve. He absorbed the punishment that was rightly due to us so that we could walk free. Some teachers who believe in works-righteousness will pretend to believe in this sweet exchange. But they will qualify it by saying that Jesus died for our past sins, but not for our future sins. But if Jesus did not die for our future sins, then how are our future sins atoned? That is where we come in. That is where our righteousness is applied to do what the sacrifice of Christ could not. That is where works-righteousness comes up. Indeed the efficacy of the cross is assuaged in favor of the efficacy of our own righteousness. For if you were saved at a young age, you would have committed more sins after you were saved than you did before you were saved. Your righteousness is more powerful than the righteousness of Christ.

I concede that our place in time can be a little confusing. When we see the power of God in our own lives, it might be confusing to think that this covered sins that we will commit in the future. But it will be helpful to remember that Jesus died in the past. He died before you ever committed a single sin. When he died, he died for your sins. Does it make any sense to say that in 33 AD, when Jesus died, that he died for some of your sins? Consider the hymn, “My sin, not in part, but the whole, is nailed to the cross, and I bear it no more.” Some Christians pretend to affirm this when they really deny it. Some Christians believe in works-salvation, but pretend they don’t.

“Faith really means ‘faith + obedience.'” Paul’s letter to the Romans is the one systematized and thoroughly outlined treatise expounding upon what it means to be justified. He wanted to clarify in no uncertain terms what it means to be justified before God. So he wrote that all are under sin (Romans 3:23) and that Jesus Christ was a propitiation for our sins (Romans 3:24-25). That propitiation is applied to us by a particular mechanism, namely, faith. He writes, “God is the just and the justifier of the one who has faith in Jesus. Where then is boasting? It is excluded. By what sort of law? By a law of works? No, but by a law of faith. For we maintain that a man is justified by faith apart from works of the Law.” (Romans 3:26-28). He goes on to says, “To the one who does not work, but believes in him who justifies the ungodly, his faith is credited as righteousness.” (Romans 4:5). The advocate of works-righteousness could affirm these statements if they define their terms in a way that Paul never intended, and that is precisely what they labor to do.

What they will suggest is that when Paul used the word ‘faith,’ what he really meant to express was ‘faith and obedience.’ A person is justified by a lifetime of obedient faith, hence justification is by works. The obvious problem with this is that it annuls the very argument that Paul is rendering. If ‘faith’ means ‘faith + obedience,’ then think about some of the statements he made. Replace “obedient faith” with “believe” in Romans 4:5, and Paul would have said “To the one who does not work, but lives a life of obedient faith, that obedient faith is credited as righteousness.” I have too much respect for Paul to think that he would engage in such duplicitous nonsense. Yet this is the only recourse that advocates of works-righteousness have when they want to smuggle their view into Romans 3-5. Unfortunately, some Christians believe in works-salvation, but pretend they don’t in this way.

“The last step to salvation is to endure to the end.” When an advocate of works-righteousness outlines their “steps to salvation,” the model that they present will usually be something like, “1 – Believe. 2 – Repent. 3 – Be baptized. 4 – Endure to the end.” If endurance to the end is a prerequisite to salvation, it follows that we do not necessarily have salvation now, for we have not yet endured to the end. Now I do think that God will preserve his saints so that they will endure to the end (Romans 8:38-39), but that is not a mechanism for justification. If it were a mechanism for justification, then there would be no sense in which we could say that we are saved today. This seems to conflate the three types of salvation that I outlined earlier in this article. They are conflating justification with glorification. They are proposing that glorification is identical to justification.

However, if enduring to the end is necessary for justification, glorification being identical to justification, it follows that there is something that we are doing to uphold or keep our salvation. We are being obedient so that we can hold onto our salvation with all of our might. But if our justification is contingent upon our clinging to it, there seems to be no substantive difference between that and works-righteousness. For both models propose that we are judged based upon our capacity to attain eternal life. This idea that one is to “endure to the end” as a prerequisite to salvation is a disguise for salvation by works. (Notice that this is not to say that everybody who thinks that it is possible to lose your salvation adheres to salvation by works). Thus some Christians believe in works-salvation, but pretend they don’t.

Some Christians believe in works-salvation, but pretend they don’t. I write this article for two purposes, namely [1] Christians need to be vigilant and discerning. We need to be aware of what people mean by the words that they use lest we be steered away into error. Some Christians believe in works-salvation, but pretend they don’t, and we need to be able to identify them so as to guard ourselves and the both of Christ. [2] Proponents of works-righteousness may not even realize that they are teaching works righteousness. I pray that this article will serve to expose their error so that they may repent and believe the gospel. At the very least, I pray that they will use precise vernacular so that their audience will know what they are teaching. Do not say, “justification is a process.” Do not say, “Faith really means, ‘faith + obedience.'” Just say, “We are saved by our works, not by the finished work of Christ on the cross,” and let the audience assess that.