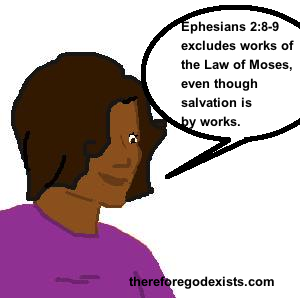 Does salvation come by faith? Why is this an issue? Well, present in the majority of the world religions is the idea that if one is a good person, they will merit eternal life with God, and those who are evil must go to Hell. This is the view of most people, a sort of surface understanding of God’s justice. The Bible teaches that Jesus Christ did their work for them. Jesus Christ died on the cross, bearing the penalty for the sins of the world (Romans 3:26, 1 John 2:2). 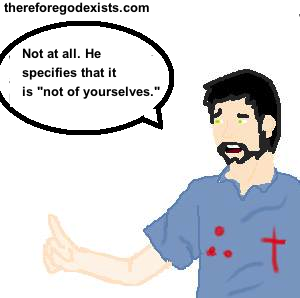 Three days later he arose, bodily, from the dead. So when we say that salvation comes by faith, we mean that in order to be saved, one must put their trust in Jesus Christ for salvation. If you were preparing to jump out of a helicopter, you would put on a parachute, and trust in that parachute for the jump. In the same way, the moment you put your trust in Jesus, you will be saved and granted the free gift of eternal life. That is what salvation by faith means.

Yet rather than trusting in the atonement of Christ, some Christians decide to trust in themselves. They put their trust in their own good works. They believe that the way the atonement is applied to a person is through their works. But what does the Bible say? Is salvation applied by works? Or does salvation come by faith?

Ephesians 2:8-9 reads: “For by grace you have been saved through faith; and that not of yourselves, it is the gift of God; not as a result of works, so that no one may boast.” Salvation is granted to a person by God, through his unmerited favor of God. Despite that one does not deserve it, God offered salvation to them. If this grace were by works, it would cease to be grace, because then, they would be earning God’s favor. But grace literally means unmerited favor. That is why Romans 11:6 says, “But if it is by grace, it is no longer on the basis of works, otherwise grace is no longer grace.” So salvation must come by faith, to the exclusion of works, lest grace cease to be grace.

In response to this, many will claim that Paul was only talking about works of the Law, not any works. But Paul writes to the exclusion of all works, and we know this because he said that salvation is “not of yourselves.” Further, if salvation came by works, why would it not be by the works of the Law? By what works, then? It seems to me that if Paul was teaching that there was an alternative law to follow, he would have been more clear. If he just meant that they can be saved by following their conscience, the mind boggles as I consider that this just leaves us with moral relativism. So God undid the Law of Moses just so that men could be saved by following their unguided conscience. I find that view neither persuasive nor faithful to the text.

Salvation is a free gift. Suppose I pick up a homeless man on the street. He was holding up a sign that said, “Will work for food.” I tell him not to worry about it and that the food was a free gift from me. Then after we eat, I take him to my house and tell him that he needs to mow the lawn to reconcile his debt. Well, then the meal was no longer a free gift. He is paying for it. He is working for it.

Yet Paul repeatedly refers to salvation as a free gift (Romans 5:15, 16; 6:23; Ephesians 2:8-9). Romans 6:23, “The wage of sin is death, but the free gift of God is eternal life through Christ Jesus.” In affirming that salvation is a free gift, Paul necessarily excludes any form of salvation by works. If it were a free gift, it would not be by works.

The entire verse reads, “But to the one who does not work, but believes in Him who justifies the ungodly, his faith is credited as righteousness.” Paul earlier states that God is the just and the justifier of the one who has faith in Jesus (Romans 3:26). Verses such as this are significant because the advocate of works cannot say that it is making a distinction between the Law of Moses and works-salvation. Paul plainly says that God justifies those who have faith. “By what sort of law?” he asks (v. 27). At this point, he has the chance to tell us about his law of works. But instead, he says, “By a law of faith.” Further, and critically, rather than denying or negating the Law of Moses, Paul concludes this section by saying, “We establish the law.” Thus Paul is not denying the Law of Moses in favor of a law of works. He establishes the Law of Moses by establishing salvation by faith.

If salvation came by works, everybody would fail. The typical view of salvation by works is that God will forgive your sins if your good works outweigh your evil deeds. But the question is, how many people can really say that? Is it not true that every inkling of mans’ heart is wicked (Genesis 6:5)? The heart is wicked and deceitful above all things (Jeremiah 17:9). There is none righteous, no, not one (Romans 3:10). If that is the case, if all are wicked, if the very center, the control-tower of man is wicked and deceitful, if there is nobody who is righteous, how could any of these people work to save themselves? Would they not all fail?

Paul walked us through this in Romans 2:17-24. He posed the question to those who would justify themselves by their works: you who say that you ought not commit adultery, do you commit adultery (Romans 2:22)? You who say that you ought not steal, do you steal (v. 22b)? You who boast in the Law, do you dishonor God by breaking the Law (v. 23)? Paul holds men up to their own standard and they realize that they fall short by it.