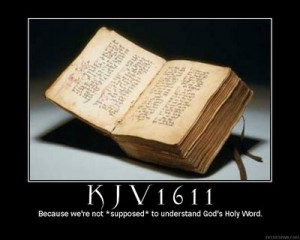 2 – It was written hundreds of years ago. Imagine that you were transported to the year 1611 and began to interact with the people around you. They would regard your tongue as strange and foreign, even if they can generally understand what you are saying. But on a certain level, your language and theirs will make for difficulties. You would need some sort of expert to translate between the two of you. If we feel that we need to understand what men have to say, how much more do we need to understand what God has to say? Get a translator, a New King James Version perhaps, or better yet, a New American Standard Bible.

3 – We do not use the original KJV. The original KJV was overwhelmed with errors. There were literally thousands of corrections between 1611 and 1769. We do not use the 1611 version, we use the 1769 version. For you to say that we should use the 1769 version is to concede that we need to appeal to the updates that scholars offered between 1611 and 1769. Why wouldn’t we appeal also to the updates that modern scholars offer based on the evolution of the language?

5 – The King James Version is unreadable. Due to the evolution of language, we often just cannot understand what the author is expressing. 1 Samuel 5:12 reads, “The men that died not were smitten with the emerods.” What is an emerod? Luke 17:9 says, “Doth he thank the servant because he did the things that were commanded him? I trow not.” I trow not? Psalm 5:6 says “Thou shalt destroy them that speak leasing.” Does God dislike realtors? There are many examples of this. Would it not make more sense if this were translated into our native language?

6 – We do not force non-English speakers to read the King James Version. When we want to share the word of God with non-English speaking people, we do not tell them that they need to learn 1611 English. We do not translate the Bible into 1611 Chinese and give it to the Chinese. We translate it from Greek into their common language. Why do we not do the same for ourselves?

7 – The King James Version has been abused. There are many people who attempt to say that the King James Version is the only version of the Bible that we can use. Bordering on bibliolatry, this idea causes division and strive within the body of Christ. While the KJV has a great part in the history of the Scripture, it would be better if this movement would just fade into irrelevancy. Perhaps to do that, we can just popularize the other, better, modern translations.

8 – There are better translations. Teams of scholars have carefully executed the processes of textual criticism upon the oldest versions of the Greek manuscripts that we have (older than that used by the KJV translators). They now offer us a translation of the Bible that is easier to understand without compromising the biblical data. The NASB is a reliable, formula (word-for-word) translation for us to use.