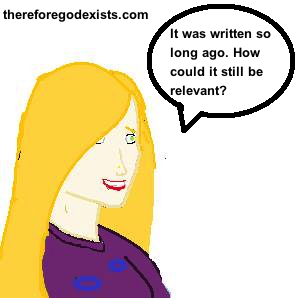 Those who do not read the Bible are often under the impression that it is just not relevant today, that its’ messages are just too archaic to apply to our modern society. Written thousands of years ago, or perhaps even tens of thousands of years ago when referring to the early patriarchs, it can be difficult to see how it could apply to our era, for God said things such as, “I am the Lord your God, who brought you out of Egypt, out of the land of slavery.” The contemporary man, when reading such a thing, will quickly realize that they were never imprisoned in Egypt. God did not lead him out of Egypt, and this was clearly written for a person who lived long ago. So is the Bible relevant today?

What should be noted is that the Scriptures were intended to apply to everybody. When the prophets recorded events, they did not do it as a personal diary, but rather it was done for the purpose of passing on to future generations so that God could be glorified and through their testimony, men would be able to see how they should live. 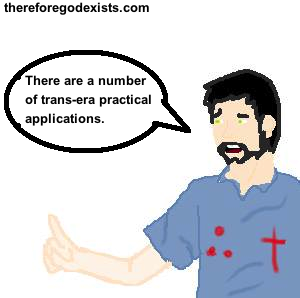 That is why Jesus appealed to the Old Testament prophets so frequently, saying not that it was too archaic to apply, but applying it despite that it was a completely different era. Jesus quoted from the Torah alone 26 times. He even emphasized the eternal authority of the Scripture in saying, “…Until heaven and earth disappear, not the smallest letter, not the least stroke of a pen, will by any means disappear from the Law until everything is accomplished.”

Jesus testified that so long as the earth still existed, that so long as men still lived, the Law and the Scriptures would still be relevant. Since the earth still exists, if he was telling the truth, then the Scriptures are still relevant today. But if they are not, then it follows that Jesus was lying and our faith is in vain. So the question presses powerfully: is the Bible relevant today?

Men Are Fundamentally The Same

It is true that there are circumstances in the Old Testament, and even in the new, that we just cannot relate to in our modern world. We have never led an army, worked for a father for his permission to marry his daughter and so forth. The Bible contains a lot of circumstances unlike those that we deal with. However that does not mean that it is irrelevant. Indeed, the fundamental nature of mankind is still the same. We are still sinners, and for those of us who are Christians, we still struggle mightily to do the will of God, and there are a lot of lessons in the Scripture that we can apply to our daily life.

While these men were in a setting that is radically different from our own, they were still human beings striving to do the will of God, and as such their stories have practical applications, and we can draw life lessons from them. In this way, the Bible is not irrelevant at all.

A similar argument can be made for the wisdom literature in the Old Testament, especially the Proverbs. Solomon was given by God more wisdom than any man who ever lived, and he expressed that in his Proverbs. Within, we find wisdom and life lessons that transcend setting and era, and apply universally. Solomon offers advice about finances, the effects of diligence and laziness, marriage, and so forth.

If not for the theological implication, I submit that people would appeal to Solomon’s Proverbs all of the time when seeking wisdom. The reason that they do not is that difficult statement that he makes, namely, “The fear of the Lord is the beginning of wisdom.” Solomon is explaining here, essentially one of the messages that he relayed in Ecclesiastes. If we have wisdom and knowledge, and everything under the sun, it is absolutely worthless if we do not seek after God.

But if we do, and if we follow Solomon’s instructions in regard to finances, diligence, marriage, and so on, we will have a recipe to succeed in those areas.

The most important of the practical applications, though, is the spiritual and salvific content of the gospel message. God has revealed himself in his Scripture in such a way that to come to know him through it is to come to know salvation; the forgiveness of all of our sins. No matter in what direction the world develops, men are called to anchor themselves in the truth of God’s revealed word. If we do that, then there is no greater practical application for ones’ life.

However that is not to say that people in society will not oppose our faith. The Bible tells us that the world will hate us, that “the message of the cross is foolishness to those who are perishing, but to us who are being saved it is the power of God.” This message of Jesus Christ, and God’s revelation through the prophets, not only has a practical application, but is meant to be the very core of mans’ life. If we live in such a way that the gospel is not the core of our life, then we are not behaving in according with the word of God.

Jesus said that we have to love him more than we love our very lives, our very families. Every day would be a struggle against sin and a strive toward righteousness. We would pick up our cross and follow him. The gospel message is supposed to be the very essence of our lives, and therefore there is no more of practical application than the Scripture. It is the inspired, inerrant, and authoritative word of God.