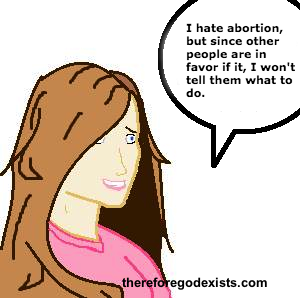 Discussions about abortion are often reduced down to arbitrarily changing the label of the other side so that their stance seems more defeasible. We are not pro-life, we are anti-woman. In fact, if we are for anything, we are for birth. But after birth, we do not really care about the well-being of that child. Accordingly, they will say that we are pro-birth rather than pro-life. By the same token, we will often designate people who are in favor of the option to get an abortion as pro-abortionists. You may even find my usage of this term a few times on this website (though primarily in the plural form because I do not think that the term “pro-choicers” sounds very good). But is this term legitimate? Can someone be pro-choice without being pro-abortion? 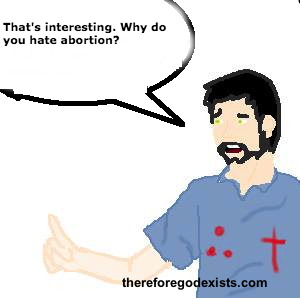 This often comes up because many people who are in favor of the right to get an abortion will say that they are personally opposed to abortion, but that they think people should be able to make that choice. Just because you are against abortion, does not mean that you should impose your morals on other people. You may prefer that others choose life, but it is a choice that they need to make, and we cannot make it for them. I think that there are several reasons to think that we should not be taken in by this line of reasoning, and that to be pro-choice truly is to be pro-abortion. 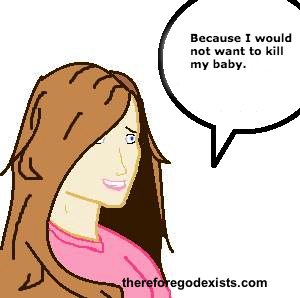 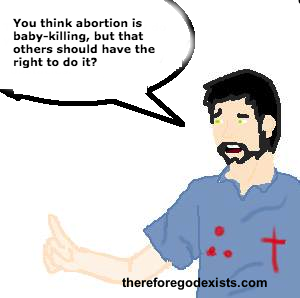 But this leads us to the question of what it means to be pro-abortion. I think that if you affirm the proposition, “Abortion should be legal and available to anyone,” then you are pro-abortion. Now, these words can be difficult to define, because there really is no technical definition of what it means to be pro-abortion. Nonetheless, there really does not seem to be any practical difference between a pro-choice stance and a pro-abortion stance. The difference is merely psychological, that you dislike the practice of abortion, but that you will defend it anyway.

Do You Think That Abortion Is A Noble Act?
Our friends who advocate for the pro-choice movement will often mount arguments leading to the conclusion that abortion is a noble cause. It is not a necessary evil, insofar as evil is concerned. It is not the slaying of an actual baby, for the fetus is sub-human. There are several arguments leading to that conclusion, but to examine those arguments closely would be beyond the scope of this article. The reason that I am pointing that out is that another way in which we could define pro-abortion is that you actually think that abortion is a noble act.

If you identify as pro-choice, but reject the term pro-abortion, then it would have to be the case that you do not think that abortion is a noble act. Abortion is a necessary evil, but it is an evil. If that is the case, then you would have to reject the typical argumentation that one would use in defense of the pro-choice cause. The only way that abortion could be a noble act is if you affirm that the fetus is somehow sub-human and that the rights of the mother supersede the rights of the sub-human fetus. But if you affirm that proposition, then how could abortion not be a noble act? It would be an extension of women’s rights. But if you think that abortion is a noble act, then how could you be anything other than pro-abortion?

On the other hand, if you affirm that the fetus is truly human, and to kill it would be homicide, then it seems that you would be left without a defense or an apologetic for the pro-choice position. You would be dangerously vulnerable to all of the critiques of the pro-life movement regarding the sanctity of life. While this could be a way for you to escape the pro-abortion label, it would be radically inconsistent. You would be saying that abortion was not a noble cause, that it was literally the slaying of a human being with intrinsic moral value, but that you affirm it anyway.

Think About Why You Are Personally Against Abortion
If you identify as pro-choice, but not pro-abortion, and that you would never personally want an abortion, think for a moment about the reasons that you have for that. You may not be able to afford to care for a baby. You may have to put it up for adoption. But nonetheless, you could never personally get an abortion. You would never do that. Why is that? For most people who claim to be pro-choice, but not pro-abortion, is that they would not want to take the life of their baby. If that describes you, then the question that you need to ask is why anybody should have the option to take the life of their baby.

You may be thinking that it is wrong to impose your morals upon other people. But think about that for a moment. There are at least two reasons that this is flawed. First, all laws reflect moral positions that are being imposed on us. We have laws against murder. That is a moral prohibition that is being imposed upon other people. If I were to punch somebody in the face, you would tell me, “You can’t do that!” and yet you would be imposing your morals on me. There are many cases in which we recognize that it is acceptable to impose your morals on others.

Second, the prohibition, “You ought not impose your morals onto other people,” is a moral prohibition that you are imposing on other people. You are imposing the ethic that it is wrong to impose ethics. So while it may seem convincing and while it may sound good, this ethic is really self-defeating, because it does exactly what it says one ought not do. This means that the reasons that you have for being personally opposed to abortion should beckon you to be part of the pro-life movement, for the same reason that you would be part of a movement that sought to retain the rights of individuals of ethnic diversity who were being persecuted. We would have no problem imposing our ethic upon their persecutors, and neither should you.

But Women Will Get An Abortion Anyway
If we were to outlaw abortion, women would still continue to get an abortion. But they would do it in unsafe and harmful ways that would probably lead to their death or serious injuries. Abortion should continue to be legal because women will have access to safe abortions. First, that term is something of a misnomer. A safe abortion is like a piece of chewing gum that is made out of iron. If a person is being killed in the process, it is not safe by any means.

Third, the person who uses a hanger to inflict a fatal wound on the fetus would be taking a very drastic measure. That is not some sort of safety blanket that individuals have in mind when they are considering sex outside of the context of marriage, when they are living in poverty. The accessibility of on-demand abortion makes people far more likely to get an abortion because they are relying on it. They will not worry so much about sex outside of marriage because they can just go and get an abortion. It provides a sense of security (ironically) that is not available to the women who is thinking of using a hanger.

Can Someone Be Pro-Choice Without Being Pro-Abortion?
Again, it can be difficult for us to define these words because to be pro-abortion can mean different things to different people. I used two definitions in this article. The first is that they are in favor of abortion being available to society. The second is that they believe that abortion is a noble act. But if you do not think that abortion is a noble act, then you are left vulnerable to the critique of the pro-life cause. Can you really affirm that abortion is murder, but that you are in favor of it anyway? That is what you would be led to say if you reject the pro-abortion label but affirm the pro-choice label.

I recognize that a lot of this comes down to semantics and wordplay, for many people. I am not interested in creating a caricature of anybody’s position. What I am doing is following this to its’ logical conclusion. If you are pro-choice and use the typical pro-choice argumentation, then you are pro-abortion. That is true even if you are pro-choice yet personally opposed to abortion. But if that does describe you, then perhaps you should consider the reasons that you have for being opposed to abortion. If you reflect upon that, it should lead you to the sanctity of human life, which will lead you to the pro-life position.

If you would like to read more, check out my article How Abortion Destroys Women’s Rights