Often in dialogue with non-believers, they will appeal to some sort of one-liner or meme to render their unbelief a more plausible stance than the existence of an omnipotent God. However, just as often as they submit these memes, they turn out to be specious, which is to say that they appear to be true, but are actually false. So the same with what we call the omnipotent paradox, which essentially attempts to pit God against himself in asking, Can God create a rock so heavy that he cannot lift it?

On the face of it, this question seems to strike many people as very challenging, because whether we answer yes, or no, it seems to lead the conclusion that God is not omnipotent. If he is powerful enough to create a rock too heavy for himself to lift, it would follow that there is possibly a rock that is too heavy for him to lift, and therefore he would not be omnipotent. But if we say that God is incapable of creating a rock that is too heavy to lift, it would follow that God cannot create something, and therefore is also not omnipotent.

While some may struggle with this question, I have never found it very problematic because it sounds more like word game than anything. It is like asking what would happen if God were in a fist fight with himself, who would win? What if God were trying to beat his own record? These are, at their core, stupid questions, and I feel almost as though I should not dignify them with a response. However there are a good number of perfectly intelligent people who are fooled by this sort of deceiving pseudo-logic, and therefore I think it is profitable to address this question.

In response to the question, Can God Create A Rock So Heavy That He Cannot Lift It? I will examine both possible answers, yes, and no.

Can God Create A Rock So Heavy That He Cannot Lift It? Yes

But if God can do anything, even that which is logically absurd, he would create the rock… and then, he would lift it. We have removed the constraints of logic by saying that God is not limited by them, so there is nothing to hold him back from lifting a rock that is too heavy for himself to lift.

Can God Create A Rock So Heavy That He Cannot Lift It? No

Many philosophers, such as Aquinas and Maimonides, held the view that the above version of omnipotence is completely absurd, for it is not possible that an impossible state of affairs could occur. So the idea that God is omnipotent, to them, and many others, is to say that God can do anything that is logically possible. But God cannot create a square circle, have a fist fight with himself, or create a rock that is too heavy for himself to lift.

Indeed, there is no paradox here, because it does not presuppose that God can do literally anything, including that which is absurd. A paradox would be an inconsistency in that which follows necessarily from being omnipotent. But if being omnipotent is limited to doing that which is logically possible, it follows that God’s inability to bring about an impossible state of affairs is perfectly consistent with the idea of omnipotence.

What Does The Bible Say About Omnipotence? 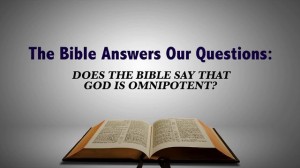 God’s omnipotence is relayed quite often in the scriptures, however I would argue that the Bible adheres to the second definition of omnipotence, namely that God can do anything that is logically possible. So the Father cannot create a rock that is too heavy for himself to lift, nor would we expect him to be able to. This is perfectly consistent with God’s abilities so portrayed throughout the Bible.

While God is said to be Almighty, there are also certain events and actions which seem to suggest that he operates within the confines of his own logical nature. God does not violate the free will of men, despite that he wants all men to come into himself, he does not force them to, for it is logically impossible to bring men into a loving relationship with himself, freely, and by force.

But we could also say that the Bible is at least consistent with the first view of omnipotence as well, that God can do absolutely anything, including that which is logically impossible. For if God can do absolutely anything, then there is no logical absurdity in him allowing men to come into himself freely, even if he does not have to. Remember, in removing the laws of logic, we also remove our ability to hold God’s omnipotence against himself.

Therefore while I think it is more plausible that God is omnipotent in the sense that he can do anything that is logically possible, both definitions are perfectly consistent with Christian theology.

One Thought to “Can God Create A Rock So Heavy That He Cannot Lift It?”