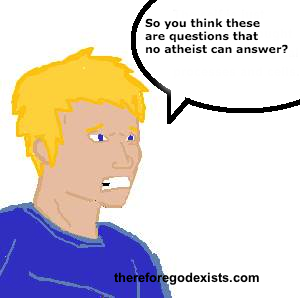 In discussion with my atheist friends, a number of topics arise and as purely intellectual questions, they are quite interesting, I think, for both parties. However atheists frequently tend to just dismiss these as ridiculous, as though they were familiar with this argument as toddlers and rejected it a long time ago. I often suspect that this is just a shell game, or a confidence trick, for even if these arguments for the existence of God fail, they are certainly not easy topics, they are not things which can be dissolved in a one-liner or 140 characters on twitter. I have summarized a few of these arguments into 10 questions for atheists, or rather they can be thought of as for Christians, to pose to atheists.

Within are questions related to religious epistemology, philosophy, history, neurology, ethics and so forth. Among these, I am not claiming to be an expert in any of them, and I say this to avoid being accused of that. I am just reciting some of the arguments which I am familiar with and phrasing them as questions. Additionally, if you are to attempt to answer these questions, I ask that you read the commentary that I made under each one and possibly post it along with the question itself when you answer it.

1 – Could the cause of all nature, space, and time, be natural, spacial, and temporal?

From this it should follow that if nature, space, and time had a cause, it should transcend nature, space and time, which is to say that it would be supernatural, immaterial, and eternal. I suppose the only way around this conclusion would be to say that the universe is eternal, which lead to logical absurdities, (such as Hilbert’s Hotel) and contradicts scientific discovery.

2 – Is there an objective moral difference between the pro-choice stance and the pro-life stance?

When the term objective morality is applied in this context, it is taken to mean moral values which are valid and binding, independently of whether anybody agrees with them or not. The question, therefore, is whether the pro-choice stance is intrinsically a more moral stance than the pro-life stance. If there is, that implies that there is a transcendent standard of morality that is beyond ourselves. But that is in stark contrast with what most atheists believe, which would be a position of non-objective moral values and duties.

As Richard Dawkins wrote, “There is at bottom, no good, no evil, nothing but pitiless indifference.”

3 – If you are a mythicist (a person who believes that Jesus never existed), is it possible that your position is influenced by your opposition to religion?

I have found that many atheists are very quick to jump on the Jesus never existed bandwagon, and I cannot help but suspect that this is a consequence of their dislike for religion. Due to their claim to respond to evidence, one must assume that they just have not been exposed to any of the scholarly work on this topic. It is the consensus of virtually all secular scholars in the field that the person of Jesus Of Nazareth did, in fact, exist. If we are to ignore the scholarly evidence in favor of some webmaster, then it seems to me that a more likely motivation is not evidence but an opposition to religion.

4 – What would you accept as evidence for the existence of a transcendent Creator of the universe?

This is a question which I regard as important but never really hear a good answer for. Most atheists and non-believers will think of something absurd, or absolutely unreachable. In fact, one person told me that if the clouds were to randomly form the words, “The Bible is the word of God,” he would not believe it, he would regard it as an unusual cloud formation.

5 – If natural determinism is true, then would it be the case that your beliefs and non-beliefs are just a consequence of a previous natural cause; a chemical reaction in the brain, and not necessarily reason?

As Doctor Sam Harris pointed out, we do not cause our causes, there is no actual free will on natural determinism, but only a very severe illusion of it, even in lower animals, but especially in humans. As such, we are just dancing to our DNA.

But if that is the case, then it seems to me to follow that the decisions we make, whether to believe, or to not believe, would just be a product of our DNA, a chain of chemical reactions in the brain, rather than a product of reason.

6 – Is it possible that the cause of genetic similarities would be that there is a common designer?

The most frequent evidenced cited of common ancestry is the genetic similarity between all organisms, indeed human beings share DNA with mice, lower primates, and vegetables, and this is a point that I happily concede. But I cannot help but think that this is precisely what we would expect if there was a common designer. Often architects and engineers use similar design blueprint and apply similar patterns and structures, so why could not the same be said of the designer of human beings?

Now I am not saying that this proves that there is a designer, but if it is possible, I have trouble seeing why, that when applying as an argument for common ancestry, this would not be a case of what Jared Orme of Conversion Points Radio called evolution-of-the-gaps, which is to say that we appeal to evolution because we do not know the answer.

7 – Is it possible that God has morally sufficient reasons for permitting evil and suffering?

Often when talking about the problem of evil, or the claim that there is so much evil and suffering that a good and omnipotent God could not allow it, this is a point that is often overlooked. What we have to remember is that as an argument against the existence of God, from a logical angle, it bears a burden of proof. It must disprove the claim that God has morally sufficient reasons for permitting evil and suffering.

Therefore my question is whether it is possible that God has morally sufficient reasons, and if not, how do you know?

8 – If Christian theology were true, would you become a Christian?

If this were the case, would you become a Christian?

9 – Many claim that they know the risen Lord lives because he lives in their heart. Would that be an inadequate way of coming to know truth?

The most common religious epistemology is the claim that we have had an encounter with the risen Lord through the witness of the Holy Spirit. It seems to me that this is a valid approach to coming to know God, for it is an approach which appeals to the five senses. At what point do we begin to deny that which our five senses is telling us, and moreover, if God really were to reveal himself in this way, how much more tragic would it be for us to deny him?

Something could be said of other religions, other people coming to know different conceptions of God in this way. I would just say that in the absence of an overriding defeater, people are perfectly within their rational rights to follow what their senses tell them. For example if I claimed to have experiences of the Almighty Square Circle, you would quickly point out that this was incoherent. But insofar as God so revealed by Christian theology is concerned, there is nothing incoherent about him, and so, why should it be invalid that we follow our five senses?

Indeed I might even go as far as to argue that it would be foolish to deny what we can see plainly.

10 – As an atheist, you support the claim that there is no evidence for God’s existence. That, in itself, is a claim which bears a burden of proof. So have you looked at all of the arguments?

But this basically goes as an implore to take another look at the arguments with an open heart and an open mind, for if there are rebuttals which satisfy your objection, and Christian theology is true, I can conceive of no greater tragedy than missing that truth out of an opposition to religion.

3 Thoughts to “10 Questions For Atheists”