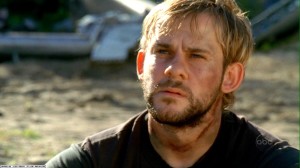 The ABC drama known as Lost was probably one of the best shows on television. It may have faded into the background of our memories in the last few years since it ended, but it still remains a supremely intelligent piece of writing. There is something about the aura of the mysterious metaphysics that Lost portrayed. We loved it because it was mysterious. We thought that we wanted the answers to the metaphysical questions, but any answer would ultimately be unsatisfying. That is what we see in the sixth season of Lost. The writers tried to answer our questions. They expounded upon the metaphysical aspect of Lost, and it really went too far. The deep mysteries, quagmires, paradoxes, whispers in the jungle, are revealed to just be specters of evil people who died. These revelations are not satisfying and indeed, there would no revelation that was satisfying, for what satisfied us was the perennial mystery, not the unraveling of the mystery. So when the sixth season of Lost unraveled these metaphysical principles undergirding the show, we are left to think, “Oh… that’s it?” The conclusion of the show will have left most of us thinking that, and so did the overall theme of the back story of season six. This is brought out precisely in something that Charlie Pace said. After watching the episode Happily Ever After, we may be left to ponder, was Charlie Pace right to think that the ultimate purpose of mankind is to find a significant other? 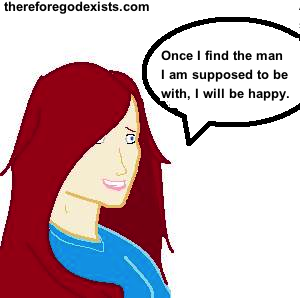 If you are afraid of spoilers, trust me, I am doing you a favor. Read this article, spoil the episode and pretend that Lost ended when the atom bomb went off at the end of season five. When Desmond Hume was tasked with chauffeuring Charlie to perform in a rock concert, Charlie relayed a near death experience that he recently had. He explained that when he died, he saw a beautiful blonde woman, and they were together. He said in this vision, they always had been together and always will be. He said that it was “conscious altering,” and that he was “engulfed by her.” He said that what he saw was “the truth.” This vision of being with a woman was “the truth.” He believed that the ultimate fulfillment of human happiness was to be with a woman and be in a relationship with a woman. Was he right? Was Charlie Pace right to think that the ultimate purpose of mankind is to find a significant other? 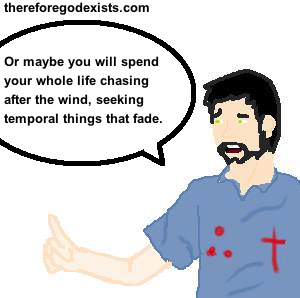 Charlie Pace is not the only one to think that. If I am to appeal to other characters on Lost, I recall a conversation during the first season between Kate and Sun. Sun said something like, “When I was a little girl, I believed that when I found the man that I loved, I would be happy forever.” Kate did not wave a dismissive hand. She affirmed, “Me too.” This is common wisdom. People believe in this idea of soul mates. They believe that there is one person out there who they are meant to find. Plato seemed believed this as well, as he articulated that male and female were created as a unified creature, and then separated. Now it is our task in life to find the person with whom we are supposed to be. (I am not an expert on Plato – I could be wrong about that.) This just seems to be a default view of what love is. People are looking for that relationship into which they will be “engulfed,” and that they can finally say that this is “the truth.” They want a relationship that is “conscious altering.” They want perennial feelings of rapture and joy and deep, heart pounding love that last forever. They are trying to fulfill the total capacity for human desire in a significant other.

The problem is that this is to stretch the role of a significant other beyond its’ capacity. Thus, every relationship that a person has will leave them unsatisfied. They will leave the person that they are with because they no longer have constant heart-pounding enamor. They are no longer “engulfed,” and they no longer think that it is “conscious altering.” It may have seemed that way in the beginning, but eventually it becomes mundane and just merges into real life. This leads them to think that they have not found the person who they were “destined” to find.

But perhaps relationships and marriages were not meant to function in that way. Perhaps marriages were not meant to be the ultimate fulfillment of the human heart. Perhaps marriages and significant others are not meant to be “the truth.” Instead, I would suggest that marriages do not have to constantly be filled with enamor, awe, engulfing feelings. The problem is that people are treating love as though it were a feeling that one has. You find this person and you have these reciprocal feelings that literally consume you. When somebody is in love, there certainly will be feelings. But love functions. Love is a lifetime of action that one performs. If I am in love, I am patient, kind, etc, etc (1 Corinthians 13). It is not so much that I am having feelings for somebody. Feelings are present, but they do not define the relationship and they do not define love. The defining element is rather than we are living in commitment, loyal, trust and union with one another as we hone our life together. Was Charlie Pace right to think that the ultimate purpose of mankind is to find a significant other? Not at all. He was extending relationships and marriage beyond their capacity.

People are desperately seeking true joy and the fulfillment of their desires. When we get a taste of something sweet, we want more of it. People with addictive personalities want to consume themselves in it. People will take drugs and want to be engulfed by what seems to be a conscious altering feeling. As they seek it more, they plunge further into ruin. People eat food, have a laugh, have a nice day and think something like, “This is what life is all about.” They will have an affair, indulge in greed, Hollywood, entertainment, and as they seek more, the overarching reality is that these things cannot satisfy them. Even those that we admire, who we think have ascended the height of fame, glory, riches, and wealth, have not been able to grasp the ultimate fulfillment of human desire. Kurt Cobain was one of the greatest musicians of his generation. He could be with any woman in the world, lived in opulence and decadence… and he shot himself. When Deion Sanders won the Superbowl, he said that it was the loneliest night of his life. He got to the top and realized that there was nothing there. People seek after these feelings of bliss and euphoria and when they finally achieve them, they realize how worthless they are.

As Solomon wrote in Ecclesiastes 1:14, “I observed everything going on under the sun, and really, it is all meaningless – like chasing the wind.” The things in this world are fleeting. They are temporal. We get a taste of them and then they melt on our tongue. There is no flavor to savor. There is nothing but chasing after the wind. The Superbowl, fame, opulence, lust… they are just chasing after the wind. We look in every direction to find something that will satisfy us. We desperately want the thing that will make us happy. Was Charlie Pace right to think that the ultimate purpose of mankind is to find a significant other? Not at all. This is like chasing after the wind. It cannot satisfy the human heart.

Jesus Christ is the ultimate fulfillment of human joy. Yet in the greatest stroke of irony, the paradox of paradoxes, the exemplar of a raging lunacy, we flee from the only Person in the universe who can fulfill us. John 3:19 reads, “And this is the verdict: The Light has come into the world, but men loved darkness more than light, because their deeds were evil.” We cling to darkness and sin because we think that it will make us happy and we flee from the light because we know that it will vanquish the darkness. We are fleeing from Jesus Christ so that we can chase after the wind. Yet he is the one who created us. He created us for this immense capacity for joy precisely because he is the only one who could fulfill it. He wants us to realize that there is nothing in this world for us, and that we need to turn to him. For he died for our sins. We are criminals and Jesus Christ stepped in and took our death sentence on himself. Then he rose from the dead. Now if you put your trust in him, he will grant you the free gift of eternal life.

Was Charlie Pace right to think that the ultimate purpose of mankind is to find a significant other? Was he right to think that a significant other is “the truth”? Not at all. For these things are fleeting and temporal. But Jesus Christ, the one whose words last forever (Matthew 24:35) said, “I am the way, the truth, and the life. Nobody comes to the Father but by me.” (John 14:6).

Read more:What Does ‘Jesus Died For Our Sins’ Mean?