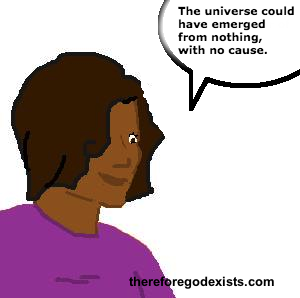 The perennial debate between believers and non-believers has often focused upon the existence of the universe. When a skeptical person asks the believer why it is that they believe in the existence of God, they will point to the sky, the ocean, the trees, and the wide variety of life. Of course, this would be a simplistic version of the intuition that they are expressing. They are expressing that everything in the universe could not have emerged from nothing. However, oddly, some atheists have suggested that it is possible for some things to emerge out of absolutely nothing. Among those things are universes. They have demanded justification for the position that things cannot come from nothing. Is it true, then? Can a universe emerge from absolutely nothing?

One can understand why they would demand justification for this premise. Many people seem to take it for granted that things do not just appear with absolutely no cause. But it would be quite convenient for the atheist if it were the case that this were a possibility. Atheism would then be able to deflect one of the seminal arguments for the existence of God. We need to be able to provide some justification for thinking that universes cannot emerge from absolutely nothing.

‘Nothing’ Has No Causal Powers 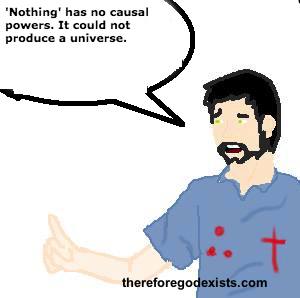 When I use the word ‘nothing,’ I mean literally, ‘no thing,’ which is to say that I am referring to the absence of something. If your co-worker was taking a day off, the boss would naturally ask, “Who is going to cover your shift?” If the coworker said, “Nobody,” the boss would be concerned. ‘Nobody’ has no causal powers. They cannot perform the function of the job because ‘nobody’ designates the absence of somebody. Similarly, if I said that “There is nothing to eat,” my stomach would be empty. If I said that there was nothing that could stop the invasion of a particular army, I would be expressing that the military force would go unchallenged. All of this goes to underline the point that ‘nothing’ has no causal powers, because it is the absence of anything at all.

So when atheists tell us that a universe could emerge from absolutely nothing, or attempt to provide accounts of how nothing could have produced the universe, they are expressing an incoherent thought. If ‘nothing’ designates the absence of anything at all, then it follows that there are no causal powers. If there are no causal powers, then it lacks the capacity to produce universes. This should be obvious to all of us. ‘Nothing’ could not produce the universe for the same reason that ‘Nobody’ could cover your shift at work. 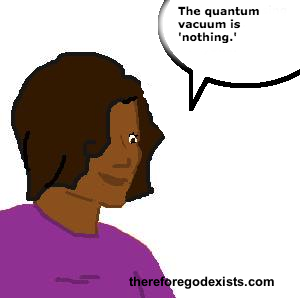 However, I am afraid that some atheists have not quite felt the force of this objection. The popularizer of science, Dr. Lawrence Krauss, has attempted to circumvent this objection by redefining what ‘nothing’ is. He will tell us that there is a difference between what a sophisticated scientist regards as nothing and what the average person regards as nothing. He suggests the quantum vacuum fits into the category of ‘nothing,’ and that universes can emerge from it. However, in doing so, he has applied several descriptions and categories to the quantum vacuum that would render it appropriate to charge him with the simple equivocal fallacy. When he describes the quantum vacuum, he often describes it as “unstable” and “complicated.” 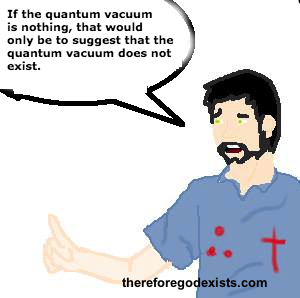 But then the question arises: how is it that ‘nothing’ could truly be stable or unstable? How could ‘nothing’ be complicated or simple? The concept of nothing lacks these categories. It is akin to as if I said that there were no equations for me to solve, but that they were very complicated. Feeling the force of this objection, Dr. Krauss wrote in the fourth preface to his book A Universe From Nothing the question that he is answering is not a philosophical question. It is a scientific question. Accordingly, he is not truly speaking about ‘nothing’ in the philosophical sense. He is just redefining his terms so that his area of expertise comports with the debate about the existence of God.

That is why the secular physicist who possesses a doctorate in quantum mechanics, Dr. David Albert, wrote a scathing critique of Krauss’s book. He suggested that quantum fluctuations were not the emergence of something coming out of nothing. They are more like pointed fingers coming forth from a fist. He writes, “Krauss is dead wrong, and his religious and philosophical critics are absolutely right.”

What If Universes Could Come From Nothing?

Suppose for a moment that it were true that things could appear without any cause at all. If that were the case, then our rational expectations for the universe would seem to be unjustified. It would become inexplicable why anything, and everything did not emerge without a cause at all. This point was charmingly made by Dr. William Lane Craig in his debate with Dr. Peter Slezek. He pointed out that nobody is concerned that as they are sitting in this debate, a horse may have appeared uncaused out of nothing in their living room and is currently defecating on the carpet as we speak. Yet if things do just appear, uncaused, out of absolutely nothing, then what resource do we have to deflect this belief? How could the atheist call anybody irrational for holding this belief?

Now, atheists might be inclined to suggest that only quantum particles, on the micro level, will appear, uncaused, out of nothing. Macro objects, such as horses, do not appear out of nothing. But recall what nothing is. ‘Nothing’ has no properties. There is no reason for us to expect that only quantum particles would emerge from absolutely nothing. There is no mechanism within ‘nothing’ that would discriminate against large objects in favor of smaller ones. Accordingly, if we accept the proposition that things appear, uncaused, out of nothing, we are led instantly into absurdity.

This point may be more probabilistic than the previous points in this thread, but it is still worth nothing. Common experience indicates that things have an explanation. They do not just appear, uncaused, out of absolutely nothing. The entire project of science is predicated upon this premise. Science is the search for causes within the natural world. If we were to establish the premise that things appear without a cause, then the project of science would be wholly undermined. Scientists who searched for causes of natural phenomenon would be engaging in a fruitless endeavor. It may just be that their specimen emerged without a cause. Why does a fish have a particular gill? Perhaps it appeared, uncaused, out of nothing.

But we all recognize that this is not the nature of the world that we live in. The premise that things do not appear, uncaused, out of nothing is constantly verified, and never falsified. Our common experience is sufficient for believing in this idea. In fact, the flourishing of modern technology and the success of scientific naturalism is evidence that it is true that things do not appear without a cause. If they did, then we would live in a radically different world and a literally incoherent and unintelligible universe.

Did God Come Out of Nothing?

I am adding this section for those fans of Richard Dawkins who have managed to read this far. They will suggest that this argument is a case of special pleading. Well, first, I have not mounted an argument. I have only defended the premise that things do not emerge without a cause. Strictly speaking, an atheist could have read this article and agreed with many of my major points. However, some will boastfully comment, without reading the content, demanding to know whether God can come out of nothing. The answer is that God cannot come out of nothing. Theists do not maintain that God is a finite being who emerged at some point in time. (Granted that you could have an eternal universe just as there is an eternal God, but that is not what the evidence suggests).

So, then, who created God? Nobody created God. Within the context of cosmological arguments, we posit that God is the cause of the universe, including time. That means that he would have to be timeless. As an objection to cosmological arguments, the ‘who created God?’ question would be incoherent. You may choose to raise it as an independent question, disconnected from the argument. Then I would ask why it is that God would need a cause and ask what you mean by ‘God’. If we are adopting classical definitions of the existence of God, as found in the Bible and the great confessions of faith, then God is both eternal and metaphysically necessary. Therefore, whether this question is acting as a counter-strike to cosmological arguments or an independent argument, it expresses an incoherency.

Can A Universe Emerge From Absolutely Nothing?

If you are looking for alternative ways to define ‘nothing’ then you are engaging in some debate other than this one. Speaking of ‘nothing’ is just to speak of the absence of something. The absence of something entails the absence of causal powers. In the absence of causal powers, then it necessarily follows that neither universes, nor anything else, could emerge from nothing without a cause. However, the evidence suggests that the universe truly did emerge from nothing. So, what seems more rational: Someone created something out of nothing, or no one created something out of nothing? To ask the question is to answer it.